2 former Google interns reveal what it’s really like to work at the tech giant, and their advice for turning an internship into a full-time job 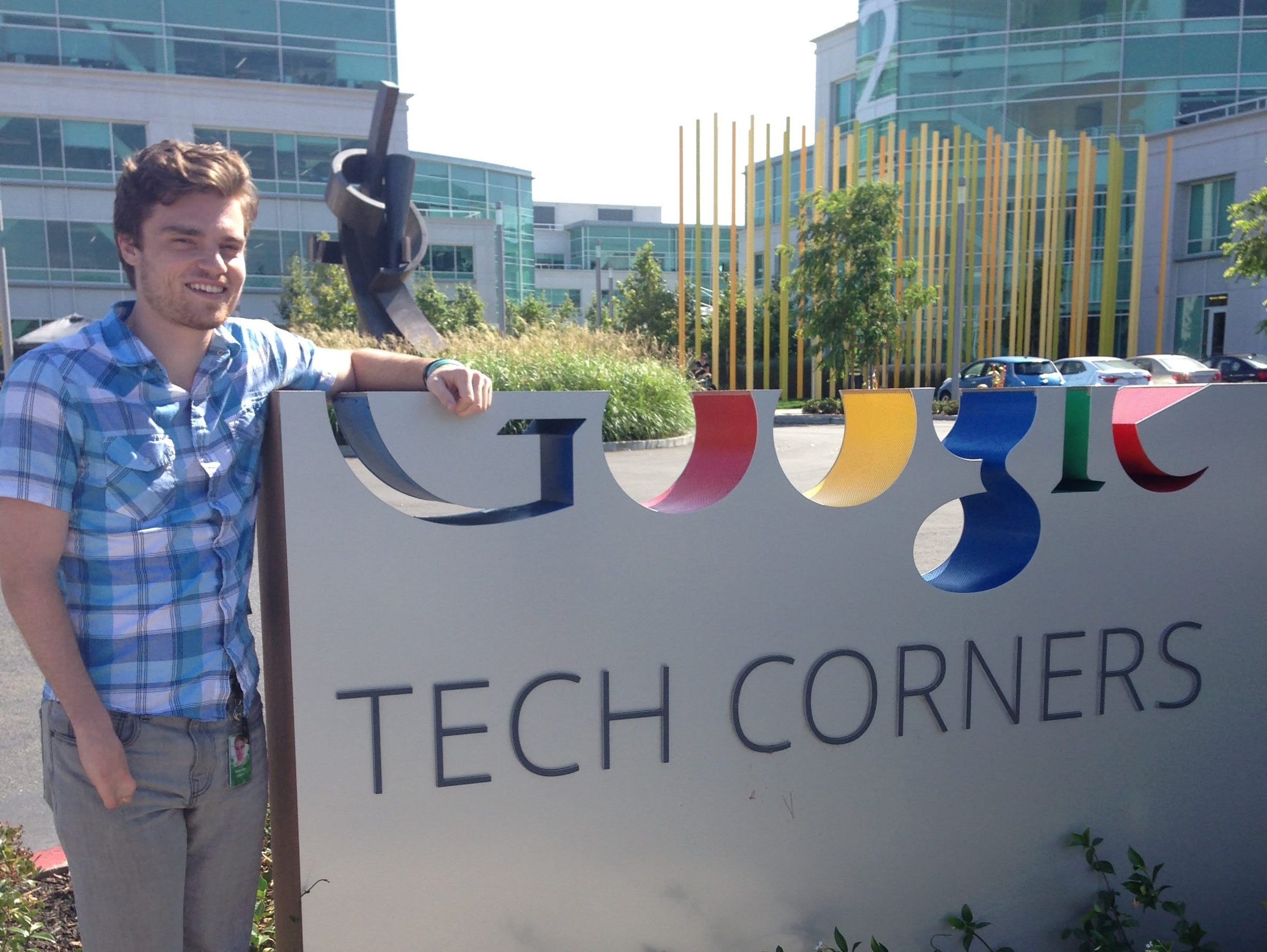 Google can receive more than 100,000 applications for its internship program each year. The search giant offers positions in both tech and business roles, and in 2020 hosted interns in 43 countries around the world. "In the early days at Google, the focus was on finding anyone with the technical skills to do the job to come in and help us build new technologies right away," she said. "Now, 20 years later, it’s much more important that we hire for culture ‘add’ and to build a workforce that represents our users."

Florence added that one of the key qualities they scout for is a "growth mindset," meaning people who actively participate in their work and activities because they want to learn, grow, and connect to others.

"We give interns responsibility from the very start, and we expect them to have an impact right away," she said.

Internships are staying virtual in 2021, with Google offering a workspace allowance of $1,000 (or local equivalent) on necessary business-related equipment and furnishings. Interns still receive the coveted welcome package including the intern backpack and a laptop delivered to them with Google hardware.

The firm doesn’t disclose the number of interns who go on to work full time for the company or the precise salary range. Employment review site Glassdoor notes that in the United States, software engineering interns earn on average $7,700 a month.

To find out what the program’s really like, Insider spoke to two former interns about their experience before the pandemic.

Using mentors as a resource and career guide

Dasani Madipalli was an engineering practicum intern, a program for college freshmen and sophomores, at Google’s Mountain View campus in 2017. Having worked for the payments team, she went on to intern with Microsoft and Khan Academy, and told Insider she would’ve interned for life if she didn’t have to pay off student loans. "As an engineering practicum, they pair you with another intern. You both work on the same team, either on similar projects or the same product," she said.

The team had four interns with two mentors between them, whose role was to make sure that they could succeed in their tasks. Madipalli was also appointed a mentor outside of her team whom she could talk to without worrying about being evaluated on performance.

Madipalli and her fellow interns were invited to a number of talks.

"One that really made an impact on me was a talk by Karishma Shah, who was the chief catalyst at X, the moonshot factory," she said, referring to Google’s secretive research and development facility. "It inspired me so much that I reached out to her after, and she took me and a few other women on a tour of the X campus."

There were also get-to-know-you activities with other interns, where they hung out and ate snacks, as well as technical workshops to learn infrastructure and internal tools.

But it was the soft skills she developed through her mentor that Madipalli found most valuable.

"It was the first time I’ve ever heard the term imposter syndrome. To know that what I was feeling in my head was not abnormal was super valuable. My mentor shared a lot of her own experiences from interning as a master’s student to help me overcome that," she said.

Madipalli said that when she first started at Google, she felt out of place, fearing the other interns were more talented and had better experience.

"Eventually, you learn what you don’t know and get on the same page as everyone else," she said. "My mentor taught me that it’s not about what you know before starting, but rather your ability and willingness to learn it. That perspective made a huge difference for me, and I stopped irrationally worrying that I’d get fired."

Steven Claunch is a brand marketing manager within Google’s Brand Studio, which focuses on storytelling to help define the brand. In 2015, Claunch interned in people operations, working as an analyst on the careers site and social-media manager. He heard about the internship through Lime Connect, an organization Google partners with that works with disabled students. Claunch said that from day one his mentor encouraged him to reach out to what Google calls "subject domain experts" in areas that interested him.

"You really can cold-ping someone and say, ‘Hey, I’m interested in this subject. Is there any chance that we could grab 15 minutes to chat about it?’" he said.

These conversations are some of the best conversations Claunch has had in his time at Google. One experience that stood out was reaching out to a behavioral economic specialist inside the company.

"I’m really interested in some of the irrational things that we do as people. I spent a lot of time as an intern talking to these subject experts about how to frame surveys in a way that you don’t bias the data, how to best find a representative sample," he said.

Madipalli, now a program manager at Microsoft, said that her Google mentor — whom she keeps in touch with to this day — regularly reminded her that no one is expecting you to know everything.

"She told me not to be afraid to lean into what you don’t know. Don’t let it stop you from being curious and asking questions, don’t be afraid to feel stupid. That was really helpful," she said.

On a technical level, Madipalli admitted that at times she felt overwhelmed because the coding is so different from what you learn in the classroom.

"It’s a totally different experience, partly because there’s so much of an existing framework. Even if you’re really good at a certain programming language, working on applications and large infrastructures such as TLS is totally different," she said.

"You just work by slowly figuring out what you need specifically to finish the task at hand and eventually feel like you know more and more," she said.

Madipalli said that she was able to bond with interns away from the pressure of the office through events like hiking and craft workshops. More popular events, like indoor skydiving or going to a basketball game, were awarded via lottery.

She received the standard-issue swag, including the intern backpack, cap with fan, shirts, water bottles, and stickers. Those are to keep — however, you have to hand back your laptop and any hardware at the end.

"One of the best things about being there in person was definitely the food," she added. "They had a series of local food trucks rotating. I’m going to sound like such a millennial, but my favorite was one that did avocado toast and coffee."

Claunch said that he was surprised by the lengths his team went to in order to make him feel not just included but celebrated. "From day one, they made me feel welcome and invaluable. Over the summer of my internship, we had fun team events, including spirited team lunches and tournaments in the office arcade room. On my birthday, they surprised me with a cake and threw me a little party," he said.

Basing everything in data

Claunch said that Google tries to work with a "flat hierarchy," where people of different levels can collaborate on making decisions together.

"I was considerably younger than everyone else on my team. The advice I was given to navigate that was ‘always lead with data.’ It’s become a mantra at Google, and it’s a great equalizer when you’re working with senior people," he said.

Of course, this can lead to a lot of noise. In order to hone in on the things that actually are going to matter to the person that you’re trying to influence, Claunch said that the most effective filter is looking at the frameworks and themes coming from above.

"Anytime I was looking at data, I was trying to show how it connects back to the high-level goals of my team and ultimately the company. It’s about forming a cohesive narrative," he said.

He learned that metrics are the best way to build consensus around an idea, regardless of your seniority.

"For my main intern project, I was tasked with increasing the engagement rates on a couple of our social-media accounts. In turn, I spent a handful of my first few weeks designing Google Consumer Surveys to get a better understanding of the type of content our target audience was interested in seeing," he said.

The data from this quick survey helped him shape the social-media strategy for Google Students and come up with new campaigns.

"Then, as these campaigns went live on our channels, we would use the native analytics platforms on each channel to measure which series were driving the most engagement," he said.

Highlighting results and impact to get a full-time offer

When it comes to turning your internship into a full-time role, Claunch said don’t be afraid to talk up your achievements. Many interns are required to put together what they call a "deck," which is a presentation at the end of the internship that summarizes insights the intern has gathered on their project.

"I put a lot of effort into identifying actionable takeaways that the team could work on. It was a crisp presentation that people could refer to after I was gone, and it had a detailed plan that they could actually put into action," he said.

If he had to point to one lasting impact he had during his internship, it would be the social-media campaigns he created.

"I created a backlog of content for several of these series, which my team was able to pull from and post once I was back in school. It was super cool — and a little strange — to see my posts in the real world from the vantage point of an audience member," he said.

Just like a good resume, which he recommended interns put together at the end of their time at Google, Claunch advised demonstrating the impact that you drove.

"Near the end of my internship, I started up a Google Doc and began cataloging all of the different projects I’d worked on and the impact I’d made. Once I began to think of my resume as a document summarizing my unique impact rather than a repository of my various job descriptions, it really opened up doors for me," he said.

Full-time offers are only made to final-year students, so Madipalli was offered a returning internship, but chose to broaden her horizons at other firms. However, she did note that in the end, it’s your manager who decides whether you get a further offer at Google.

"It helps to make clear it’s a goal to return from the beginning," she said. "In the end, the only influence you have is making clear to your manager what you contributed and quantifying your impact on the project or the team."