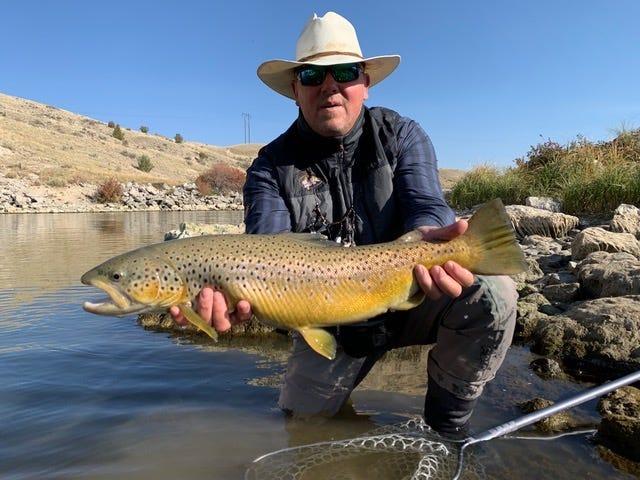 Fly-fishing is a tough industry to break into, especially as a guide.

Seasonality, lack of job benefits, and perpetual sunburns are common downsides to the job. Spending your days on the water, meeting interesting people, and doing what you love, however, are the major upsides.

Guides don’t actually fly-fish on the job. They make lunches, schedule shuttles, row rafts and drift boats, instruct clients, tie on flies, and untangle knots, all while delivering an exciting experience. They’re ecologists and entertainers who understand their rivers and are capable of giving beginner anglers a shot at catching fish every day.

Few people manage a long-term career in fly-fishing — and those who are successful tend to have serious business savvy.

Shaun Jeszenka is one of those rare few who progressed from guide to outfitter to fly-shop owner. Here’s how he did it.

Jeszenka began as a seasonal guide while completing a journalism degree at the University of Montana. He continued after college, working additional side jobs to make ends meet in the offseason. "As a young guide, I never really entertained the idea of putting out my own shingle and becoming an outfitter," Jeszenka said.

Things changed when he got an opportunity to acquire special-use permits for several rivers in Southwest Montana. Jeszenka made the jump from guiding as a contractor under other outfitters to becoming an outfitter who could hire his own guides on top of his own daily trips. Outfitters collect full price for their own trips while also taking a cut on any contract guides hired.

"The permits were trading for a lot of money, up to $300 for each day. I talked three of my best clients into loaning me the money. I then traded them for guided trips over the next decade to pay off the loans. It was a worthwhile venture, as those permits have multiplied in value over time," he said.

Outfitters are still constrained by summer seasonality in Montana, leaving a long winter without guide trips and income. Landing a rare job on the Rio Grande in Tierra Del Fuego, Argentina, filled out Jeszenka’s year, and he worked his way into the head guide role, spending 19 seasons at the lodge.

"The sea-run brown trout there, which average 10 pounds, have provided me with an adventure I never could’ve fathomed in my youth," he said.

He said over the course of his time there he’s guided professional athletes and politicians, including former President Jimmy Carter; Ted Turner, the founder of the CNN and Turner Broadcasting; former Vice President Al Gore; former US Sen. Sam Nunn; and former US Energy Secretary Ernie Moniz.

"I often feel that I’ve learned as much from them as they’ve learned about fly-fishing from me," Jeszenka said.

In 2019, Jeszenka acquired and revamped an aging fly shop. He reworked the layout and merchandising and gained more permit days for the local rivers in the process.

He sat down with his banker, and with their help plus the local Small Business Administration chapter, as well as a few minor investors, he purchased Frontier Anglers in Dillon, Montana, for about $700,000.

Outfitting takes place on the river and doesn’t have requirements for a storefront because clients can be booked over the phone. Jeszenka would manage scheduling and guides while meeting clients at their lodging or on the river. Moving into the retail space was a significant change, with an inventory of fly-fishing and outdoor equipment.

"The outfitting side of the fly shop came naturally, but the retail portion has its own learning curve. I’m fortunate to have some good people around me. My fiancée, Sheila, is a tremendous help at the shop," he said.

Jeszenka said the first changes he made were purchasing Lightspeed, the best point-of-sale system he could find, and investing in a first-rate website and online store platform.

"Almost every day, I try to step back and look for ways to make everything function more smoothly and efficiently," he said.

The retail shop has added to Jeszenka’s daily schedule. His day starts with coffee and East Coast client calls, then he hits the fly shop at 7 a.m. to organize guides with their clients for the day.

Then he’s on the river, guiding until around 5 p.m. The day ends back at the shop, where he wraps up the retail operations, handles pressing matters, and outlines the schedule for the next day. He’s lucky to make it home by 7 p.m. during the busy season.