A private-jet designer who builds $250 million custom planes with multiple showers, faux fireplaces, and walk-in closets shares what his job is like 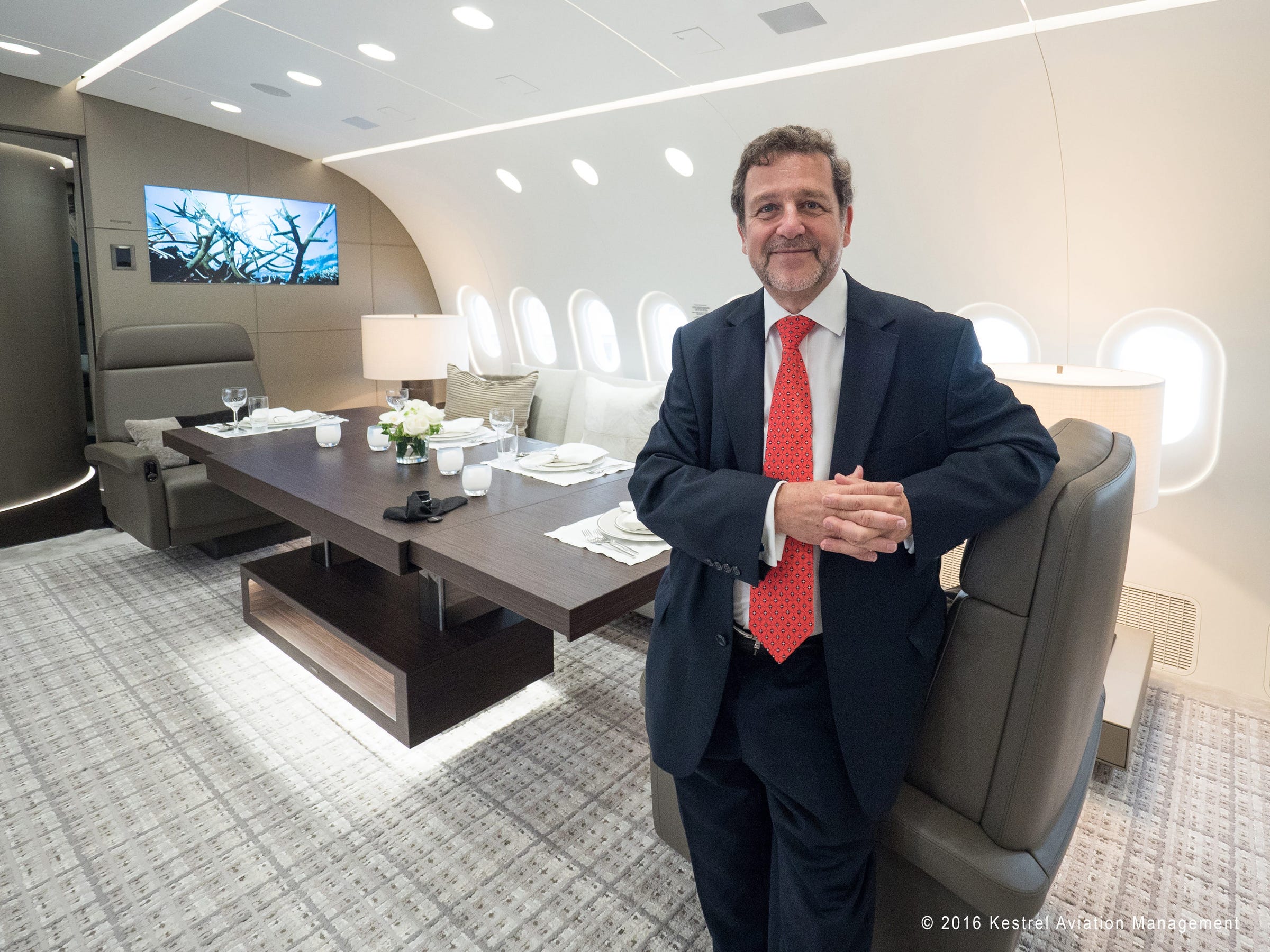 Five years ago, the story of a Boeing Dreamliner 787 refitted as a private jet made headlines around the world.

The commercial plane, usually filled with up to 335 passenger seats, was designed instead to accommodate just 40 people. The 6,500-square-foot interior featured walk-in wardrobes, silk-accented carpets, a giant washroom with an oversized shower and double sinks, and a home cinema-like entertainment suite.

It even incorporated noise-dampening technology to reduce the in-flight sound while cruising down to just 48 decibels, compared with a standard 60.

The jet reportedly cost more than $320 million in total and was bought by a Chinese billionaire and the owner of Hainan Airlines, based in Haikou, China, who said he planned to lease it out on charters.

The VIP 787 was developed by a small, discreet company based in Kirkland, Washington. Kestrel Aviation is the private jet world’s secret weapon, specializing in the purchase and design of private planes.

CEO Stephen Vella, a four-decade aerospace veteran, and Nohl Martin, who oversees marketing, are the only full-time employees, opting instead to bring in additional talent as needed on each project.

Before the pandemic, revenue was $1 to $3 million a year, Vella told Insider, and though turnover has decreased, the company remains profitable.

Here’s a look inside their business. Vella estimated that one-third of his business comes from ultra-high-net-worth individuals around the world and two-thirds comes from governments tapping him for custom planes.

"To manage a VVIP aircraft project, it’s pretty intense, so we work on no more than two at any one time," he said.

The largest project, a 747 whose cabin outfitting cost between $150 and $250 million, was for a government he declined to name, citing NDAs.

"There’s a lot that goes into a government airplane: a secure comms suite, anti-missile systems, and counter measures — each government has a different idea of what to put in, so it’s always bespoke and one-off," he said.

Although he said he had one Middle Eastern client who insisted that Kestrel upgrade his Bombardier Global, adding higher pixel-count screens and specialty woods as finishes.

It also featured a heated floor, technology which Kestrel workshopped and then saw adopted as a standard option by rival manufacturer Gulfstream as an option on its 650 model. "Once you’ve worked it out, why not offer it to other people?" Vella said. The core of Kestrel’s business focuses on Airbus and Boeing jets, the planes that Delta and others use for commercial service.

The company acts as the middleman between the manufacturers and clients, producing a proposal based on a brief — how many people the plane should carry, its likely flying routes — and then haggles with Chicago, IL-based Boeing and Airbus, whose commercial business is based in Toulouse, France.

He’ll buy what’s known as a green aircraft, industry parlance for a plane without a cabin interior — they’re often painted in a green primer before the exterior is customized for the buyer.

Vella aggressively plays the two firms off against each other, noting that the differences between their core private jet-aimed planes, the Airbus A320 and Boeing 737, are minimal.

Over his career, he’s bought 350 commercial airliners. "American customers will buy Boeing and don’t give Airbus the time of day. It’s just part of the American preference for being nationalistic," he said. "In the Middle East, their inventory for VVIP large aircraft? It’s 50/50."

A ready-for-service aircraft — green aircraft, plus cabin and high-speed internet connectivity — typically costs around $115 to $120 million for the popular Airbus A320Neo.

Once the deal is signed, Vella and his team will begin to conceptualize the interior while the body of the plane is under construction at either plant. They work with industrial and interior designers to create detailed, 3D renderings within FAA regulations.

A cabin outfitter then steps in to fit out the interior under Kestrel’s supervision. The entire process can take up to 36 months from receipt of RFP to an aircraft entering into service, mostly because Vella and his team focus on achieving the impossible at 36,000 feet. Marble, a staple of luxury interiors, is one such problem. Thick slabs of marble are too heavy — shave it too thin into a veneer, though, and it will crack, since the body of an aircraft flexes constantly while in flight.

Vella’s team took an existing technique, which etched the marble to a thin layer and attached it to an aluminum honeycomb structure and perfected it for in-flight use. The resulting material is light, strong, and flexible, with minimal risk of cracking, and made its début in that headline-grabbing Chinese plane.

"That massive bathroom in the 787 had a vanity with two sinks, but two people could easily lift it. It looked totally made of marble, but it was so light," he said.

Installing a shower is simple, but baths are near impossible. Weight constraints limit how much water a plane can carry, and there’s danger a full tub might overspill in choppy air and seep into the electrical systems.

Instead, he’ll suggest an additional shower — he never recommends more than two on any plane, largely again down to the volume and weight of water needed.

"I did have a Middle Eastern customer come to me and say, ‘I want five showers,’ and we did the calculations — if passengers took three showers in each of them, you’d end up having to forgo a lot of the baggage space underneath the aircraft," he said. "Eventually, we got it down to three out of the five he requested." Kestrel has even devised a faux fireplace that uses lights to evoke burning logs.

Sometimes, design elements are strategic rather than esthetic. Vella confessed that the original buyer for the 787 decided not to keep the aircraft, and it was up to Kestrel to adapt the interior to resell on the open market.

"Down the corridor from the main entrance, there’s something that looks like a gong, and we did that because we knew it would probably sell in the Middle East or Asia and needed some architectural cues that would be perceived favorably," he said. "In Asia, it’s seen as a gong, while Middle Eastern customers look at it like a shield."

Vella said that he’s also worked on a few conversions of a Boeing 747, the long-range, widebody plane beloved among AV geeks. Its maiden flight was in 1969, and it was the first plane dubbed a jumbo — Boeing has announced the last new 747 will leave the factory in 2022.

"They weren’t offered for VVIPs until late in the day, but governments have bought some of them," he said. His firm has worked on outfitting them as private planes for four different countries.

A 747 interior has approximately 4,500 square feet of usable space, so the work scope is huge — the bigger the aircraft, the more complex it is (compare that with the 2,415 square feet typical in a Boeing 787, for instance). Many of the government-operated 747s pass unnoticed at major airports.

"Most of them are not recognizable," he added. "It’s very common in the Middle East to paint the exterior of VIP government planes in the same livery as that of the national airline."

Once Kestrel delivers a craft, whether a 747 or otherwise, its role isn’t over. Vella knows that in a decade or so, most clients will return to him and ask for the cabin to be ripped out and redesigned (indeed, his Boeing 787 has just been sold to its third owner, a Middle Eastern entity he declines to name).

"That’s when major maintenance on an airplane needs to be carried out, whether it’s a VVIP craft or not," he said. "So it’s as good a time as any to replace the leather on the seats."