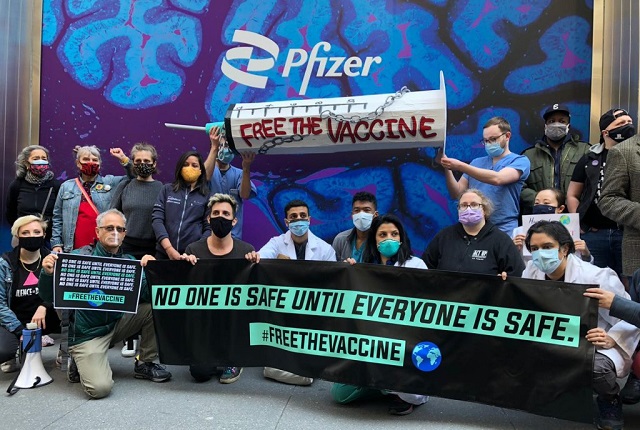 The scarcity of Covid-19 vaccines across the developing world is largely the result of efforts by vaccine manufacturers to maintain their monopoly control and profits.

by Joseph Stiglitz and Lori Wallach

The Covid-19 vaccines have been developed by scientists from all over the world, thanks to basic science supported by numerous governments. We must not let drug companies put profits ahead of lives.

The only way to end the Covid-19 pandemic is to immunize enough people worldwide. The slogan “no one is safe until we are all safe” captures the epidemiological reality we face. Outbreaks anywhere could spawn a SARS-CoV-2 variant that is resistant to vaccines, forcing us all back into some form of lockdown. Given the emergence of worrisome new mutations in India, Brazil, South Africa, the United Kingdom, and elsewhere, this is no mere theoretical threat.

Worse, vaccine production is currently nowhere close to delivering the 10-15 billion doses needed to stop the spread of the virus. By the end of April, only 1.2 billion doses had been produced worldwide. At this rate, hundreds of millions of people in developing countries will remain unimmunized at least until 2023.

It is thus big news that US President Joe Biden’s administration has announced it will join the 100 other countries seeking a Covid-19 emergency waiver of the World Trade Organization intellectual-property (IP) rules that have been enabling vaccine monopolization. Timely negotiations of a WTO agreement temporarily removing these barriers would create the legal certainty governments and manufacturers around the world need to scale up production of vaccines, treatments, and diagnostics.

Last fall, former President Donald Trump recruited a handful of rich-country allies to block any such waiver negotiations. But pressure on the Biden administration to reverse this self-defeating blockade has been growing, garnering the support of 200 Nobel laureates and former heads of state and government (including many prominent neoliberal figures), 110 members of the US House of Representatives, ten US Senators, 400 US civil-society groups, 400 European parliamentarians, and many others.

The scarcity of Covid-19 vaccines across the developing world is largely the result of efforts by vaccine manufacturers to maintain their monopoly control and profits. Pfizer and Moderna, the makers of the extremely effective mRNA vaccines, have refused or failed to respond to numerous requests by qualified pharmaceutical manufacturers seeking to produce their vaccines. And not one vaccine originator has shared its technologies with poor countries through the World Health Organization’s voluntary Covid-19 Technology Access Pool.

Recent company pledges to give vaccine doses to the Covid-19 Vaccines Global Access (COVAX) facility, which will direct them to the most at-risk populations in poorer countries, are no substitute. These promises may assuage drug companies’ guilt, but won’t add meaningfully to the global supply.

As for-profit entities, pharmaceutical corporations are focused primarily on earnings, not global health. Their goal is simple: to maintain as much market power as they can for as long as possible in order to maximize profits. Under these circumstances, it is incumbent on governments to intervene more directly in solving the vaccine supply problem.

In recent weeks, legions of pharmaceutical lobbyists have swarmed Washington to pressure political leaders to block the WTO Covid-19 waiver. If only the industry was as committed to producing more vaccine doses as it is to producing specious arguments, the supply problem might already have been solved.

Instead, drug companies have been relying on a number of contradictory claims. They insist that a waiver is not needed, because the existing WTO framework is flexible enough to allow for access to technology. They also argue that a waiver would be ineffective, because manufacturers in developing countries lack the wherewithal to produce the vaccine.

And yet, drug companies also imply that a WTO waiver would be too effective. What else are we to make of their warnings that it would undermine research incentives, reduce Western companies’ profits, and—when all other claims fail—that it would help China and Russia beat the West geopolitically?

Obviously, a waiver would make a real difference. That is why drug companies are opposing it so vehemently. Moreover, the “market” confirms this thinking, as evidenced by the sharp decline in the major vaccine-makers’ share prices just after the Biden administration’s announcement that it will engage in waiver negotiations. With a waiver, more vaccines will come online, prices will fall, and so too will profits.

Still, the industry claims that a waiver would set a terrible precedent, so it is worth considering each of its claims in turn.

After years of passionate campaigning and millions of deaths in the HIV/AIDS epidemic, WTO countries agreed on the need for compulsory IP licensing (when governments allow domestic firms to produce a patented pharmaceutical product without the patent owner’s consent) to ensure access to medicines. But drug companies never gave up on doing everything possible to undermine this principle. It is partly because of the pharmaceutical industry’s tight-fistedness that we need a waiver in the first place. Had the prevailing pharmaceutical IP regime been more accommodating, the production of vaccines and therapeutics already would have been ramped up.

The argument that developing countries lack the skills to manufacture Covid vaccines based on new technologies is bogus. When US and European vaccine makers have agreed to partnerships with foreign producers, like the Serum Institute of India (the world’s largest vaccine producer) and Aspen Pharmacare in South Africa, these organizations have had no notable manufacturing problems. There are many more firms and organizations around the world with the same potential to help boost the vaccine supply; they just need access to the technology and know-how.

For its part, the Coalition for Epidemic Preparedness Innovations has identified some 250 companies that could manufacture vaccines. As South Africa’s delegate at the WTO recently noted:

“Developing countries have advanced scientific and technical capacities… the shortage of production and supply [of vaccines] is caused by the rights holders themselves who enter into restrictive agreements that serve their own narrow monopolistic purposes putting profits before life.”

While it may have been difficult and expensive to develop the mRNA vaccine technology, that doesn’t mean production of the actual shots is out of reach for other companies around the world. Moderna’s own former director of chemistry, Suhaib Siddiqi, has argued that with enough sharing of technology and know-how, many modern factories should be able to start manufacturing mRNA vaccines within three or four months.

Drug companies’ fallback position is to claim that a waiver is not needed in light of existing WTO “flexibilities.” They point out that firms in developing countries have not sought compulsory licenses, as if to suggest that they are merely grandstanding. But this supposed lack of interest reflects the fact that Western pharmaceutical companies have done everything they can to create legal thickets of patents, copyrights, and proprietary industrial design and trade secret “exclusivities” that existing flexibilities may never cover. Because mRNA vaccines have more than 100 components worldwide, many with some form of IP protection, coordinating compulsory licenses between countries for this supply chain is almost impossible.

Moreover, under WTO rules, compulsory licensing for export is even more complex, even though this trade is absolutely essential for increasing the global vaccine supply. The Canadian drug maker Biolyse, for example, is not permitted to produce and export generic versions of the Johnson & Johnson vaccine to developing countries after J&J rejected its request for a voluntary license.

Another factor in the vaccine supply shortage is fear, both at the corporate and the national level. Many countries worry that the United States and the European Union would cut off aid or impose sanctions if they issued compulsory licenses after decades of threats to do so. With a WTO waiver, however, these governments and companies would be insulated from corporate lawsuits, injunctions, and other challenges.

This brings us to the third argument that the big pharmaceutical companies make: that an IP waiver would reduce profits and discourage future research and development. Like the previous two claims, this one is patently false. A WTO waiver would not abolish national legal requirements that IP holders be paid royalties or other forms of compensation. But by removing the monopolists’ option of simply blocking more production, a waiver would increase incentives for pharmaceutical companies to enter into voluntary arrangements.

Hence, even with a WTO waiver, the vaccine makers stand to make heaps of money. Covid-19 vaccine revenue for Pfizer and Moderna just in 2021 is projected to reach $15 billion and $18.4 billion, respectively, even though governments financed much of the basic research and provided substantial upfront funds to bring the vaccines to market.

To be clear: The problem for the pharmaceutical industry is not that drug manufacturers will be deprived of high returns on their investments; it is that they will miss out on monopoly profits, including those from future annual booster shots that doubtless will be sold at high prices in rich countries.

Finally, when all of its other claims fall through, the industry’s last resort is to argue that a waiver would help China and Russia gain access to a US technology. But this is a canard, because the vaccines are not a US creation in the first place. Cross-country collaborative research into mRNA and its medical applications has been underway for decades. The Hungarian scientist Katalin Karikó made the initial breakthrough in 1978, and the work has been ongoing ever since in Turkey, Thailand, South Africa, India, Brazil, Argentina, Malaysia, Bangladesh, and other countries, including the US National Institutes of Health.

Moreover, the genie is already out of the bottle. The mRNA technology in the Pfizer-produced vaccine is owned by BioNTech (a German company founded by a Turkish immigrant and his wife), which has already granted the Chinese producer Fosun Pharma a license to manufacture its vaccine. While there are genuine examples of Chinese firms stealing valuable IP, this isn’t one of them. Besides, China is well on its way to developing and producing its own mRNA vaccines. One is in Phase III clinical trials; another can be stored at refrigerator temperature, eliminating the need for cold chain management.

How the US Could Really Lose

For those focused on geopolitical issues, the bigger source of concern should be America’s failure to date to engage in constructive Covid-19 diplomacy. The US has been blocking exports of vaccines that it is not even using. Only when a second wave of infections started devastating India did it see fit to release its unused AstraZeneca doses. Meanwhile, Russia and China have not only made their vaccines available; they have engaged in significant technology and knowledge transfer, forging partnerships around the world, and helping to speed up the global vaccination effort.

With daily infections continuing to reach new highs in some parts of the world, the chance of dangerous new variants emerging poses a growing risk to us all. The world will remember which countries helped, and which countries threw up hurdles, during this critical moment.

The Covid-19 vaccines have been developed by scientists from all over the world, thanks to basic science supported by numerous governments. It is only proper that the people of the world should reap the benefits. This is a matter of morality and self-interest. We must not let drug companies put profits ahead of lives.

Joseph E. Stiglitz is University Professor at Columbia University. His most recent book is “Measuring What Counts: The Global Movement for Well-Being” (2019). Among his many other books, he is the author of “The Price of Inequality: How Today’s Divided Society Endangers Our Future” (2013), “Globalization and Its Discontents” (2003), “Free Fall: America, Free Markets, and the Sinking of the World Economy” (2010), and (with co-author Linda Bilmes) “The Three Trillion Dollar War: The True Costs of the Iraq Conflict” (2008). He received the Nobel Prize in Economics in 2001 for research on the economics of information.