Deirdre Dunn started her career winning a hamburger-eating contest on the trading floor at Goldman Sachs. Now she’s one of Wall Street’s star traders at Citigroup. 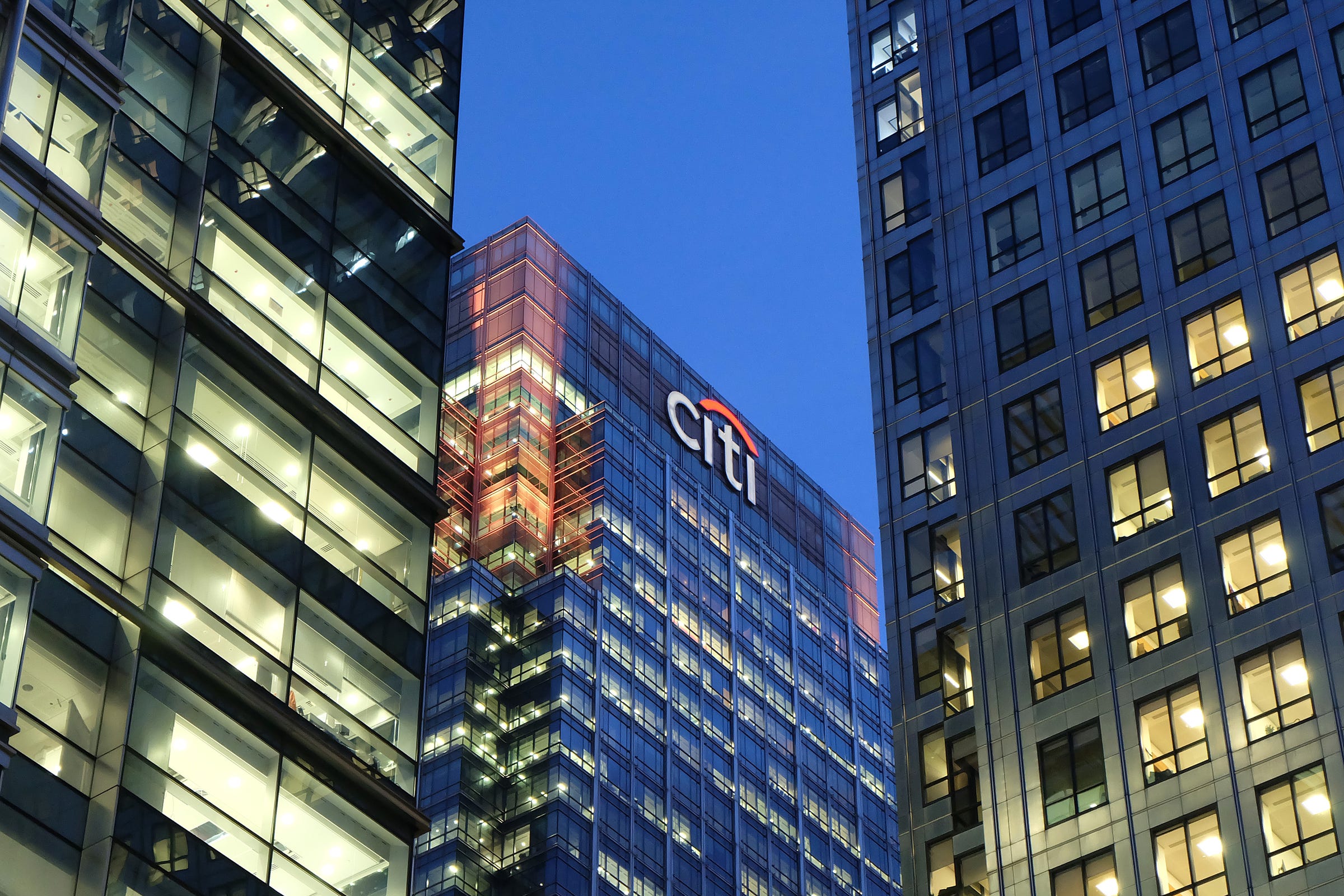 In the middle of a Goldman Sachs conference table sits a pile of White Castle hamburgers.

At one end of the table is 21-year-old trading analyst Deirdre Dunn. At the other end, a female sales analyst.

Dunn didn’t have much interest in participating in the annual hamburger-eating contest that took place on the trading floor the day after bonus day, but her competitive spirit got the better of her.

"The people who participate get 10% of all the money betted, which is a lot of money when you’re a first-year analyst and struggling to pay rent in New York City," Dunn said. "So I agreed."

Like a scene from a 90s Wall Street movie, an onlooker clicked a stopwatch and for an hour, Dunn went head to head with her colleague in eating as many hamburgers as she could, with bets being placed on how many could be eaten individually as well as collectively.

"People would come in and they’re like going over the hoot with updates about how everyone’s doing," Dunn said, citing the device traders on the floor use to communicate with each other.

Dunn estimates she ate around 18 hamburgers by the end of the hour, while her colleague had eaten around 16.

"Someone afterwards said, ‘this is kind of crazy, but it’s probably going to be really good for your career,’" Dunn said. "And for years, I would hear from people on the day when they’d order White Castles like, ‘Remember that time when you ate all the hamburgers?’"

At that time, Dunn thought she would only be in the industry for a few years. But her love for the trading floor transformed her into one of the industry’s most highly regarded traders with stints making markets at Goldman Sachs, Lehman Brothers and Citi in mortgage-backed securities.

Today, Dunn co-runs Citi’s global rates division alongside Pedro Goldbaum. The division forms part of the firm’s fixed income business, which had revenues of $4.6 billion in the first quarter of this year. The world of trading has changed a lot since Dunn first stepped foot on the floor as a Goldman Sachs summer analyst in 1998 when, on her first day, she introduced herself to her boss only to receive a surprised reaction and a claim he must have deleted the email that said he was getting an intern.

In recent months, as junior investment bankers and analysts have spoken out about burn-out in the industry amid the pandemic, firms have provided benefits such as free Peloton bikes and pay increases to ease the burden.

There are more women, too. Goldman Sachs’ 2020 campus analyst class was majority women for the first time.

And more controls are now in place compared to the 90s and early 2000s where trading floors had a Wild West atmosphere, which inspired many classic books and films.

Still, Dunn enjoyed the chaos of the floor compared to her quiet lab work as a chemical engineering student.

"I would say that it was an intense time," Dunn said. "It was less electronic and so there was just a lot more noise and you could feel like being a part of something in a different way."

The tough work environment didn’t faze Dunn, and she barely noticed the lack of other women on the floor despite being in the minority. She just felt young, inexperienced, and hungry to get better.

"The intensity of it at times I enjoyed, it felt fast paced, and it felt like a bunch of smart people working together to try to get stuff done and I enjoyed that aspect of things a lot," Dunn said.

"You feel when you’re doing well, you’re doing your job," Dunn said. "And when you’re losing money you’re ‘failing.’ So it can be somewhat disproportionate in terms of the emotional experience."

In 2005, Dunn joined Lehman Brothers as a trader of what are known as mortgage pass-throughs. She then ultimately started to run the broader pass-through trading desk.

A pass-through is a pool of fixed-income securities where each security contains a large number of debts, such as mortgages or car loans. It’s referred to as a ‘pass-through’ because a financial intermediary will collect monthly interest payments from the issuers, take a cut and then pass the rest to investors.

The most common pass-through is a mortgage-backed security (MBS), which played a prominent role in the financial crisis.

In the early 2000s, there was a boom in housing. MBS made it possible for more people to buy a home and, in turn, seemed to offer investors a safe and consistent way to make money.

Lehman Brothers became a major player in this market, acquiring mortgage lenders in the mid-2000s to assert its dominance in the real estate arena. The firm’s capital market’s division revenues surged.

Dunn was able to call the shots, manage risk, and train the team.

"I took a lot of pride in building the team out that we had as well, and all of our performances there," Dunn said.

But just as Lehman Brothers brought highlights, it also came with a low point.

By the first quarter of 2007, cracks in the US housing market were becoming apparent as defaults on subprime mortgages rose to a seven-year high. Many of these products had been bundled with lower-risk loans into mortgage-backed securities as demand soared.

Despite those mounting defaults, Lehman assured investors the risks were well contained. However, Dunn was already managing the volatility of the mortgage market for the bank.

It was like being on a crazy rollercoaster that never ended and it started much earlier than people realized, Dunn said. By August 2007, she would wake up in the middle of the night, unable to sleep.

Less than a year later, the mortgage market had crumbled, forcing the collapse of fellow Wall Street heavyweight Bear Stearns. Lehman, which was the world’s fourth-biggest investment bank at that point, was racking up losses and its share price was in freefall.

Every day felt like going to war, Dunn said.

The firm rushed to reduce its exposure to the mortgage market, but it was too little, too late.

On September 15, 2008, Lehman Brothers filed for bankruptcy, leaving its thousands of employees without a job and becoming a symbol of excess in the financial crisis.

For the first time in 10 years, Dunn had no risk to manage and it no longer mattered whether the market went up or down. It was a very weird sensation, she said.

The crisis, while difficult to navigate, proved to be a valuable learning experience for Dunn, and one she compared to the COVID-19 pandemic in terms of the human and emotional impact.

"Navigating the financial crisis, while trading mortgage bonds was not insignificant in its experience value," Dunn said. "It taught me very early, the importance of being adaptable in this business, which probably was only underscored by last year in terms of how everyone had to adapt very dramatically."

While the financial crisis represented a significant challenge, the setback enabled Dunn to pursue new opportunities. After a brief stint at Barclays trading a variety of different products, she landed at Citi in 2011 and took on co-running the bank’s interest-rates desk in 2019.

Running the rates division at the moment means lots of Zoom meetings, Dunn said jokingly. Yet her ability to help successfully navigate the pandemic for the division is serious business.

Dunn’s oversight helped secure Citi the coveted award for interest rate derivative house of the year from IFR and Risk.net for 2020.

Citi also retained its ranking as the world’s largest fixed income dealer for the fifth consecutive year driven by the strength of its rates division, which ranked number one, according to a Greenwich Associates survey.

The fixed-income business raked in $17.3 billion over the course of 2020, a 34% increase compared to the prior year.

Running a market-leading division means becoming a risk-manager rather than a risk-taker, Dunn said.

Dunn’s role also includes a focus on governance, client relationships and hiring. One of her goals is to demystify the world of trading for a new generation entering the industry.

"I don’t like to gamble, I don’t like all these historical stereotypes I think are really detrimental to recruiting talent and getting people to consider it, because it just portrays a one-dimensional approach, which is false," Dunn said.

As the housing market booms once again and markets recover from another crisis, Dunn highlights that risk management is always evolving.

"You have to be constantly on the lookout for new or emerging risks – in the market, new products, new players – what do these, and more, mean for a trading book’s performance, ability to access liquidity, and move risk," Dunn said.

Dunn is now a long way from her days as analyst on the trading floor. She said it’s hard to look back on the intensity of that time and to feel any type of negativity or unhappiness because it’s part of her career history.

Unless, of course, it’s a White Castle hamburger, which she never ate again.