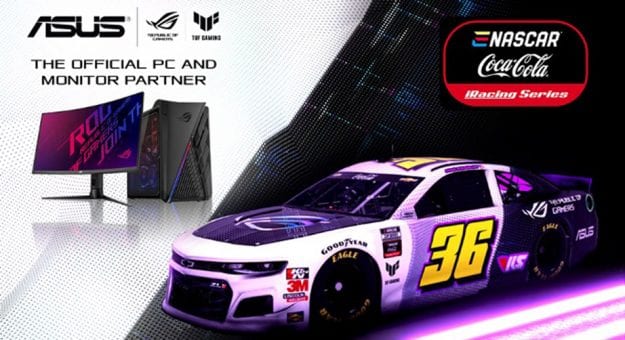 Gaming hardware company ASUS has renewed its partnership with eNASCAR for the remainder of the eNASCAR Coca-Cola iRacing Series. 2021 season.

As part of the agreement, ASUS’s Republic of Gamers (ROG) product line will be marketed in eNASCAR’s in-race broadcasts, as well as on its social media. Moreover, a ROG-themed paint scheme will be featured on its sim racing vehicles.

Nick Rend, Managing Director of Gaming and Esports at NASCAR, commented: “ASUS is a major supporter of the sim racing community and an expert in delivering top-tier products to PC gamers and sim racers around the globe.

“The eNASCAR Coca-Cola iRacing Series features the most elite sim racers in the world and this partnership can deliver the equipment they need to compete at the highest level.”

This marks the second consecutive year ASUS has remained as the series’ official PC and monitor partner.

Kelvin Jeon, Brand Marketing Manager at ASUS North America, added: “Following the success of the 11th season of the eNASCAR Coca-Cola iRacing Series, we’re excited to continue our partnership with eNASCAR and bring sim racing to even greater heights at both in-person and virtual competitions. As the ongoing Official PC and Monitor of the eNASCAR Coca-Cola iRacing Series, ASUS is dedicated to providing both spectators and sim racers with world-class experiences on the track and beyond!”

RELATED: After a tough 12 months, sim racing’s silver lining is its rise in popularity

In addition, NASCAR has also teamed up with Coca-Cola, iRacing, and ASUS, among others, to build four unique simulators for the upcoming Coca-Cola 600 NASCAR Cup Series race on May 30th, as a part of the organisation’s NASCAR Salutes programme.

After the race is over, all simulators will be donated to the United Service Organizations Inc. (USO). The non-profit organisation will designate two bases to house the devices, which will further provide service to the military community and their families.

Esports Insider says: The renewal of the partnership suggests both parties’ satisfaction with their previous collaboration. Considering the huge levels of exposure sim racing continues to receive, it’s a good decision by ASUS to stay on board with NASCAR.