Freed of London sells pointe shoes to the world’s most famous ballet companies. Thousands of pairs are handmade each year by only 24 artisans — here’s what their jobs are like. 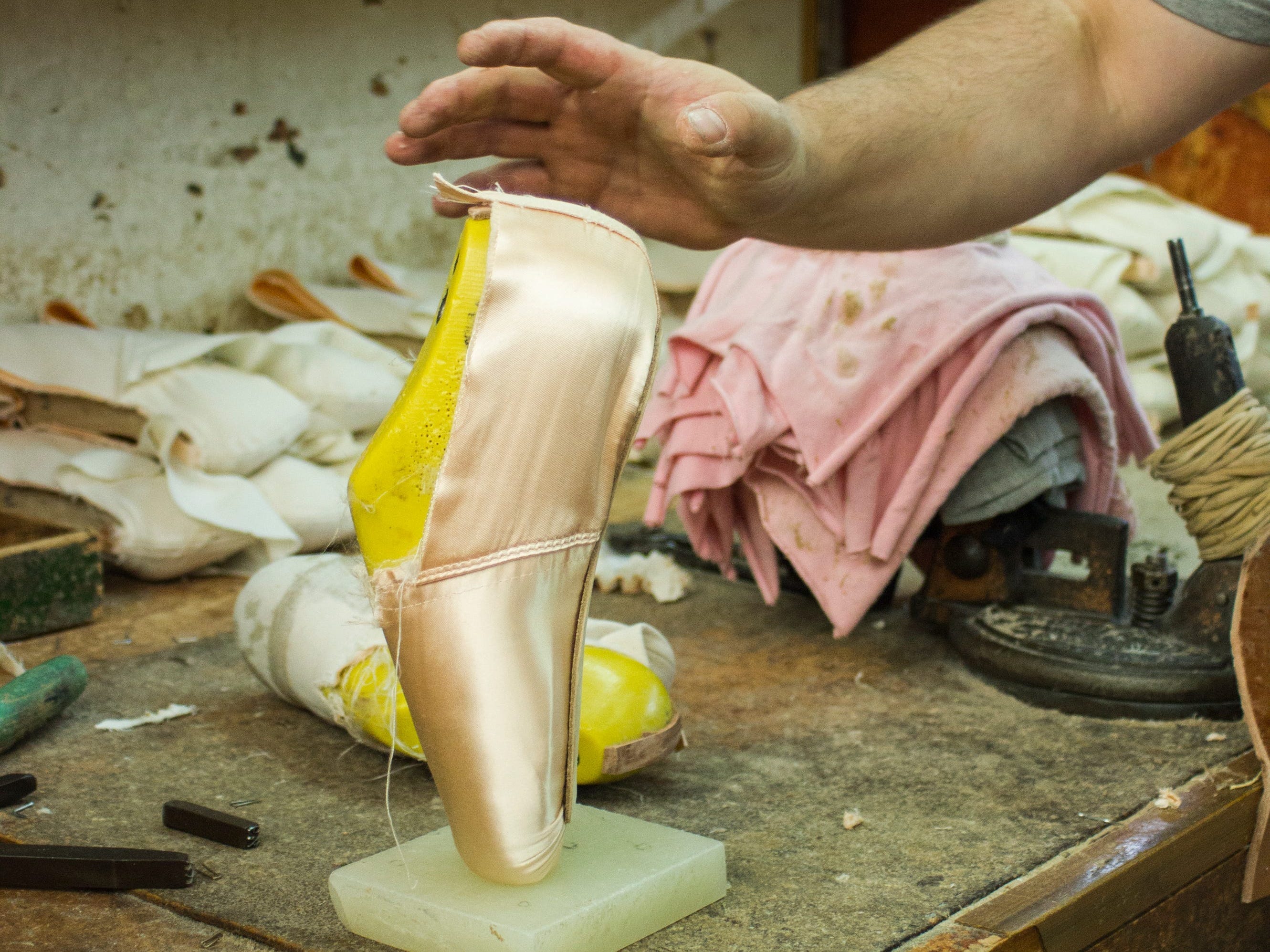 Like a painter’s brush, a ballerina’s pointe shoe is her most important piece of equipment.

Pointe shoes extend a dancer’s range of movement and allow them to stay suspended in the air and move more quickly across the stage. Since their invention in Italy in the 1800s, they’ve come to define ballet as we know it.

At popular pointe-shoe maker Freed of London — which works with ballerinas at some of the most renowned ballet companies in the world, including the Royal Ballet in London and American Ballet Theater in New York City — there are 24 artisans dedicated to crafting handmade shoes for ballerinas at every level. While there are many different companies that produce shoes, Freed is renowned for its dedication to customization, a tradition that can be traced back to the company’s founding in 1929 by cobbler Frederick Freed and his wife, Dora.

Custom shoes are typically worn by professional dancers and paid for by the companies with whom they dance. Costing about $100 a pair, companies make substantial investments in these essential instruments. At the Royal Ballet, the annual shoe budget exceeds $350,000, and some dancers can go through up to three pairs a day, the company told Insider. American Ballet Theater reported that each female dancer is allotted 10 pairs of pointe shoes a week, equaling about 3,600 pairs each year.

Central to the Freed’s practices are the 24 shoemakers themselves, specially trained to build a pointe shoe from scratch. Here’s a look at what their jobs are like on a day-to-day basis.

The career of a shoemaker

The makers create both stock and custom shoes, averaging about 30 pairs a day, and are paid per piece. Many of them are known to the dancers by just a single letter or symbol (a bell or fish, for example) that indicates their handiwork. While a dancer will usually try out several makers at first, they grow attached to one specific maker over time who fulfills their custom orders.

The training for the role is mostly done on the job. Prospective makers apprentice with Freed and are taught the basics of shoemaking.

At first, very little of what they produce is usable, but some take to the job with ease. "It came naturally to me," Taksim Eratli, who’s known as the "anchor maker" and been with Freed for 18 years, told Insider. "I would say it took me about six to eight months to master the making."

Still, it’s a while until the new hires are entrusted to fill custom orders. "As they learn, we put them next to other very experienced makers so they can mentor them and are on hand to say what’s good or what’s bad," Sophie Simpson, a senior manager of sales and pointe-shoe fitter who’s been with Freed since 1998, told Insider.

Many of the makers, once trained, stay at Freed for the rest of their careers — sometimes upwards of 30 or 40 years. Because the shoes themselves and the way they’re made are so specific to each dancer, makers become critical to a dancer’s career as well.

"Having a comfortable shoe can make or break a performance," Brittany Pollack, a soloist with New York City Ballet, told Insider. "When I’m onstage, the last thing I want to worry about is how my shoes are feeling."

The first essential step in the shoemaking process is a fitting. The fitters work out the length and width of a dancer’s foot and then select a maker that can naturally produce the type of shoe that fits their needs.

"All the makers follow the same system," Simpson said, "but there is a slight difference because the shoes are made by hand." Simpson compares this to variations in handwriting — the words can be the same, but the way writing looks on the page will differ from person to person.

If one maker retires, it can be disappointing news for a dancer. Pollack, who had used the same maker since first joining New York City Ballet in 2006, was recently told that Bell, her maker, had retired.

"I probably tried about 10 different makers over a period of a few months to find what pair would work best for me," she said. Finally, Pollack found a replacement — the "diamond maker." "When I first put those shoes on, I knew right away that they felt right," she said.

All of the work is planned often months in advance. The factory is high energy throughout the workday, which Eratli finds enjoyable. "It’s where all the magic happens," Eratli said.

The makers build the shoes inside-out in layers, beginning with the outer sole. The sole is staple-gunned or tacked together and then covered in the satin fabric and canvas lining. An extra pocket is left at the top where the maker will build the block. The block, according to Eratli, is the most difficult element of the shoemaking process. It can be made in a variety of ways using fabric pieces, papers, sacking, or other materials that determine its strength. Halfway through the assembly process, the shoe is tied down and sent to the stitching area. Up until this point, the shoe remains inside out. Once the sole is stitched on, the shoe returns to the maker, where it’s turned the right way out. The process is completed by shaping the block with a rounded hammer. Once the shoe is shaped, it’s baked overnight in the factory’s industrial oven.

Changing with the times

While the shoemaking process is steeped in tradition, as the times change, so does Freed. The company often speaks with dance medics, rehabilitation and physical-therapy teams, and other experts to improve upon the safety of the shoe. "We’re renowned for being as healthy for a dancer as a pointe shoe can be," Simpson said.

The company has begun to make pointe shoes for men, which are typically much bigger and stronger at the toe, as more male dancers gravitate to pointe work.

They also create shoes in a variety of colors for special occasions or for different skin tones. This is a divergence from Freed’s signature peachy pink that famous choreographer George Balanchine first fell in love with (and which no other shoe company can use). Now, as ballet reckons with its history of exclusion and more dancers of color are represented in the professional world, there’s a need for shoes that reflect the diversity onstage. Freed coordinates colors to replicate what was meant to be achieved with the ballet pink — not necessarily to match skin tone, but to give a unified, blended look to the legs and feet. In short, to disappear.

The shoes, these craftsmen know, play a supporting role. "My ultimate aim — if I do my job correctly," Simpson said, "is that when you watch a dancer on stage, you don’t see the pointe shoe."