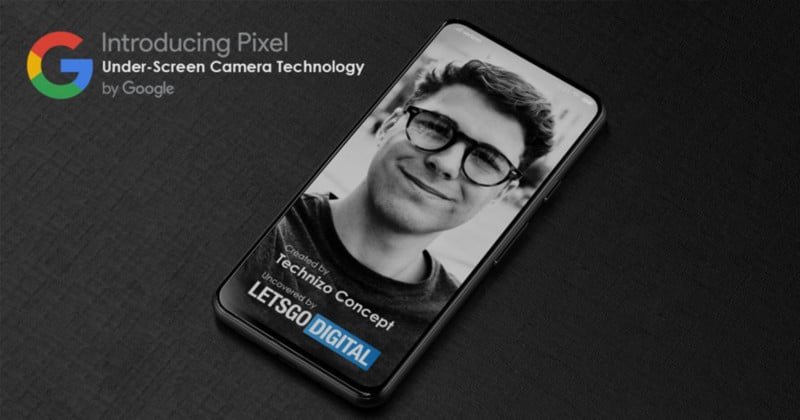 Efforts to reduce bezels and notches at the top of smartphones are impeded by one major must-have feature: the front-facing camera. While many Android devices have adopted the “hole punch” over the iconic Apple notch, Google may be headed towards a unique under-display camera.

Reported and illustrated by Lets Go Digital, a new from Google details how the company wants to implement an under-screen camera differently than its competitors.

Under-display cameras as a concept are not new. In January, the ZTE Axon 20 5G became the first handheld to offer an under-display smartphone camera in an attempt to create an uninterrupted main display.

Unfortunately, the camera in the Axon 20 is not particularly good and struggles with image degradation issues that are a direct result of its under-display placement. The technology is young though, and while ZTE certainly tried the first proof of concept, Google looks to iterate and improve.

Since this is a new technology that can be difficult to implement properly, Google seems to have has come up with an interesting solution. The company filed the patent in September of last year for a “full-screen display with a sub-display camera” where the front camera is placed under the screen and an extra display panel is integrated. This would be the OLED panel with the same pixel density as the main screen.

When the camera is not being used, the content displayed on the second OLED screen is reflected through the prism on the main display. Once the camera is activated, the prism rotates so that incoming light can reach the camera, allowing the user to take high-quality photos or videos. According to the documentation, the optical module is shielded by a window that is between two and three millimeters in size. The small auxiliary display contains three sensors that could be an ambient sensor, proximity sensor, and/or an IR sensor which could be used for 3D face detection since the company has indicated this feature would return in future models of the Pixel smartphones.

You can read the full documentation on the under-display camera here.

It is believed that the Pixel 7 may be the first model smartphone from the company to feature this new “under the screen” technology, as the Google Pixel 6 is more likely to maintain the status quo on its front-facing cameras while mixing things up a bit with its rear-facing array. That design, which leaked in mid-May, looks to continue the hole-punch solution for its front-facing camera.

That said, the Pixel 6 may be the last smartphone from Google to feature this design choice in lieu of its under-display technology.

Image credits: Renders by Let’s Go Digital and used per the publication’s guidelines.