‘How Black can I be in this moment?’ Black professionals describe the profound psychological toll of code-switching while working from home 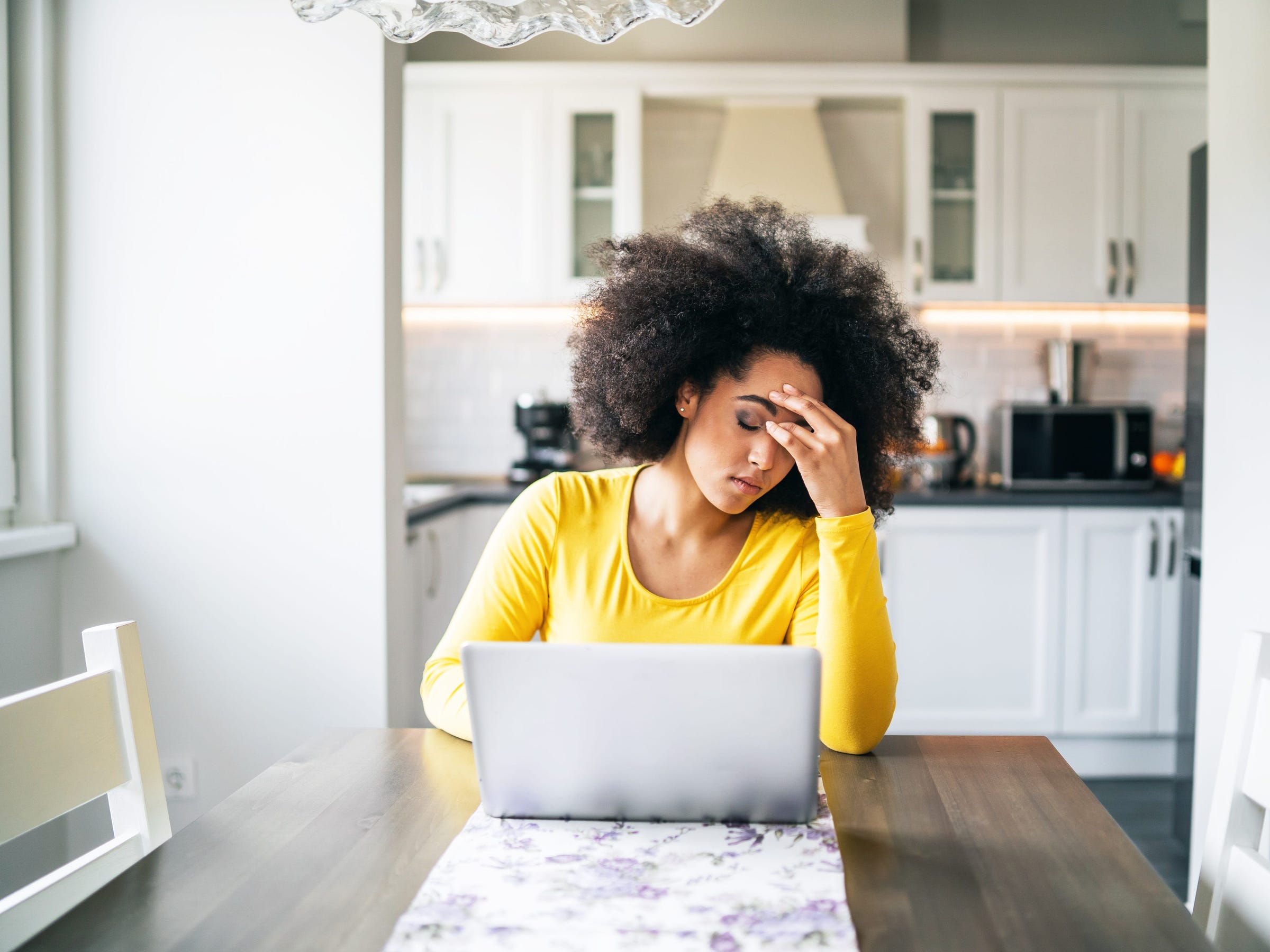 It was the professional opportunity that Jodi-Ann Burey had been preparing for, and she was ready to make her pitch. Her slide deck was perfect. And the Zoom background of her apartment — complete with paintings from her travels in sub-Saharan Africa and bookshelves brimming with Toni Morrison and Ta-Nehisi Coates titles — was on point.

When she logged on to the call, her body clenched: A gallery of nearly two dozen white faces stared back at her. "My home is my sanctuary, my safe place," said Burey, a Seattle-based writer and public speaker. "I wanted to be myself, but in that space I needed to become a different person."

And so, she engaged in what’s known as code-switching —  temporarily shifting her language, mannerisms, behavior, and appearance to conform to norms and gain credibility in the white- and male-dominated workplace. She smiled frequently to not "come across as the angry Black woman." She mentioned her mini goldendoodle — because, she said, "having a dog, especially a so-called designer dog, makes me more approachable as a Black person." And she laughed off a microaggression.

"It was a constant calculation," she said. "’How Black can I be in this moment?’"

Research shows that code-switching in corporate settings takes an enormous toll on Black professionals and can lead to diminished job performance, depression, and stress. Code-switching in the virtual realm from home might exact an even steeper emotional price and helps explain why so many Black employees are burned out, psychologists say. According to data from Insider, nearly 30% of Black workers said they feel "extremely" or "very" burned out.

"Code-switching is not just slipping between your professional and casual self; it’s changing things about your stigmatized identity in order to gain respect," said Myles Durkee, a psychology professor who conducted the research, which will be submitted to a journal this summer.

Working at home amid the pandemic’s blurred work-life boundaries has exacerbated the problem, he said. "Having to code-switch from home — a place where you are supposed to relax and let down your guard — makes it more jarring."

Feeling the need to conform to the white-dominant culture while sitting at your kitchen table is emotionally straightjacketing, said Charmain Jackman, a psychologist and founder of InnoPsych, which focuses on racial disparities in mental health. Having to "cleanse your living space" — by, for instance, changing the art on your walls or removing personal effects to make your virtual background less culturally specific — adds to the burden.

"Your home should be your sacred space. You shouldn’t worry about how you’re speaking or have to be on guard," she said. "But now, many folks of color are at home and in a white workplace. Home is no longer the place they can be themselves."

‘People of color have learned to compartmentalize’

"What underlies code-switching is the notion that who you are and what you bring to the table isn’t valued," she said. "People of color have learned to compartmentalize."

Tomi Akitunde, a journalist and the editor of mater mea, a platform for Black mothers, describes code-switching like this: "You go to work. You put on armor, and you get the job done. Then you clock out and you get to be yourself."

Akitunde practiced navigating white spaces at her alma mater, the University of Chicago, so code-switching in the workplace came easily. She made her naturally deep voice an octave higher to seem more feminine and agreeable. She also refrained from saying "y’all" and made it a point to speak only "quote-unquote proper English."

Years ago, when Akitunde worked in a newsroom, she code-switched so effectively that a colleague told her she wasn’t, "really that Black" because she talked and acted like a white person. It felt like "an assault on who I am," she said.

"I came up in a time of respectability politics, and I was taught that you have to grin and bear it," she said. "The awakening for me was the Travoyn Martin verdict. I was tired of the performance. I thought, ‘Why am I doing this?’"

Brian Pearson, president of the franchise and real-estate consultancy Invictus Development Group, recounted a similar experience. At a previous job, he was the lone person of color at his organization. "I was surrounded by people who didn’t look like me, and I had to work very hard to find common ground and establish myself as credible," he said.

The three dimensions of code-switching

Sharon Harris, the chief marketing officer of the digital-marketing firm Jellyfish, said she’s struggled with feeling inauthentic while working from home during COVID-19.

Harris, who’s held top jobs at some of the biggest companies in the world, including Microsoft, Deloitte, and T-Mobile, recalled logging on to Zoom meetings from home and feeling an uncomfortable dissonance whenever she was the only Black woman on the call. That, combined with the murder of George Floyd, which gave rise to global protests and a broader examination of racial inequity in America, caused her to reflect: "What does it mean to show up as your authentic self at work without having to resort to unnatural contortions?"

She realized that if she felt this vulnerable and exposed as a senior executive, younger employees must be hurting, too. She helped facilitate conversations between Black junior staff members and her colleagues in the C-suite. Her goal was to help fellow leaders grasp the psychological state of Black employees.

"The pandemic highlighted how many people feel like they didn’t belong," she said. "We were all in the same storm, but we were not all in the boat. Some of us were in a yacht, and some were in a life raft."

Recognizing how different employees experience working from home is a critical first step in building a more equitable and inclusive virtual workplace, according to experts. Tanjia Coleman, a diversity consultant at Reimagine OD who also teaches at Loyola Chicago’s Quinlan School of Business, recommends organizations conduct a survey to gauge employee sentiment.

The survey should elicit whether employees feel a sense of belonging. "You need a temperature check," she said. "Ask people: Do you feel like you’re part of the team? Do you feel accepted here? What are some issues in your immediate orbit, and how can we solve them?"

Organizations also need a framework and protocols for meetings in the virtual workplace. "Companies need to say what they expect to take the pressure off," she said. "Do people need to be dressier, or can they be more casual? If cameras must be on, can the organization teach people how to blur their backgrounds? How can we make people feel more comfortable?"

As for Jodi-Ann Burey, she landed the client deal and the project was a great success. But she still finds herself thinking back to that initial pitch call with a mix of bewilderment and anger. "Going through the process from home brought a different level of awareness to the cost of professional opportunities that come my way," she said. "I want to be successful, but at what price? How much do I have to change?"