I got to live my dream as a ‘Today’ show intern — even if I was 700 miles away in Lexington, Kentucky 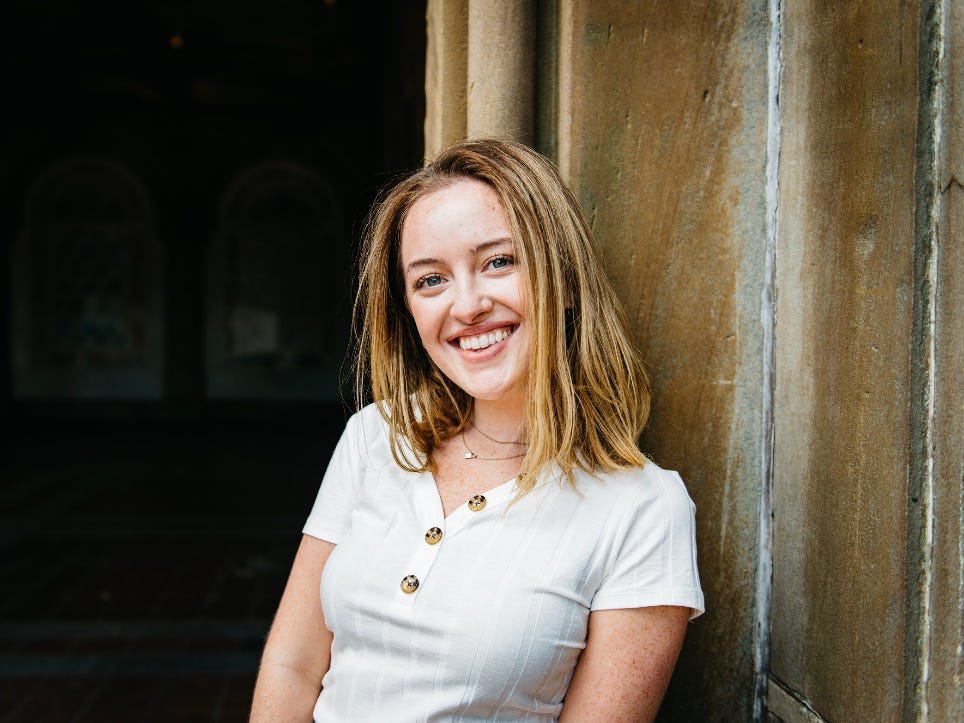 I’m a 22-year-old recent graduate of the University of Kentucky who majored in media arts and minored in writing, rhetoric, and digital studies.

I was also an editor of our school’s newspaper, the Kentucky Kernel. The University of Kentucky is in Lexington, and I’m originally from the small town of Owenton, Kentucky, about an hour northwest. I’m currently renting an off-campus apartment with my sister in Lexington that’s 10 minutes away from campus.

The ‘Today’ show internship was a dream opportunity for me, and I prepped like crazy for the interview.

When I applied to the NBCUniversal internship program, I started by applying to the broad sector of MSNBC/NBC News. After submitting those materials, I waited for a few days and received an email from NBCUniversal saying that I’d been selected to move forward in the application process, which entailed a video interview where random questions would pop up on the screen and I would only have about two minutes to answer them.

A few days after the interview, I received an email from the "Today" show that said they were interested in interviewing me one-on-one. I nearly had a heart attack. I couldn’t believe they wanted to interview me.

I already knew a good amount about the show, but I studied non-stop in the days prior to my interview — anything from past hosts from the first episode in 1952 to present day to reviewing the show’s segments to researching any and all things "Today." I was prepared to say the least.

After the final interview, I felt great about it. But I knew that it was incredibly competitive, so I wasn’t getting my hopes up.

I checked my email constantly for a week, just waiting for an update. Around 4 p.m. on a Friday, I checked my email while at a red light and there it was — an offer from the "Today" show! I couldn’t believe it. I still can’t. I think what helped me nab the internship was my extensive résumé in both news and entertainment. Though "Today" is pretty much strictly news the first three hours of the show, the fourth hour (with co-hosts Hoda Kotb and Jenna Bush Hager) is filled with lifestyle and entertainment elements, which I had experience in as well.

I worked part-time as a paid intern on Mondays and Thursdays and fuller days on Friday and Sundays.

Even though the internship was remote, there’s been no experience spared in my time with the show.

A typical week involved me helping out with any research needed for the show between 7 a.m. and 11 a.m., recording interviews via Zoom, logging/transcribing video, logging music cue sheets, and helping produce segments.

My favorite part of the internship had to be when I assisted on a segment where we highlighted the nationwide Facebook groups, Adopt-A-Server, where people who were in need during the pandemic could receive aid from those who were able to help.

I researched people who had been affected by COVID-19, primarily those who’d lost their jobs during the pandemic. I was actually able to find the woman who started the entire movement. I reached out to her and she got to appear on the show, along with many others who were helped due to her kindness and hunger for helping others. It was life-changing hearing stories from those impacted, those who were able to help, and the person who started it all. It was simply wonderful.

Even with this internship being 100% virtual, I haven’t felt deprived of experience at all.

I’ve got to work through some pretty historical stuff through my time with MSNBC and "Today."

At MSNBC, I worked through the impeachment trials with Trump, election coverage, and the beginning of the COVID-19 pandemic. With "Today," I’ve gotten to work on the inauguration and more COVID-19 coverage.

Although there are definitely things we’ve missed, like working on the Plaza, helping with concerts, and meeting everyone face-to-face, I didn’t allowed that to hinder my experience whatsoever because I’m so fortunate in the first place and everyone, for the most part, is going through the same thing.

I feel, if anything, I was able to have more face time with mentors because while everyone is still cooped up at home, everyone wants to help, and we all very much crave that human connection. I was able to have countless virtual coffees and meet people who I wouldn’t have been able to otherwise.

There’s been far too many memorable coffee dates to describe them all, but one that I remember specifically was actually fairly recent. Being a senior this semester, I’ve been on the job search. I’ve felt quite overwhelmed with the mixture of school, working the internship, and applying to tons of jobs. One of the women I worked with gave me the advice of what is for me will not pass me, and I think that’s very noble.

To further my career when I’m not interning, I spend a lot — and I mean a lot — of time on LinkedIn.

I promise you I spend more time on LinkedIn than I do on Instagram. Networking, especially in the media industry, is a crucial aspect of furthering your career. I love to reach out to people, hear about their experiences and their lives, and gain a new friend.

My career aspirations post-college are to be a full-time staff member with NBC. Long term, I’d love to be a producer for a television show. Also, I hope to write and direct my own film someday, and write a book or two.

The most valuable lesson that I’ve learned while interning at NBC is that you can do anything if you set your mind to it.

I remember about a year and a half ago; I was interning for WLEX18, and I was assigned to go work the teleprompter for the evening news. As I was walking down the hallway, I looked up on the wall and noticed various NBC posters — one of "The Tonight Show with Jimmy Fallon," one of "Nightly News with Lester Holt," and then one of Savannah Guthrie and Hoda Kotb with the "Today" show.

I remember saying to myself: "What I would do to be in 30 Rockefeller Center where all of those shows are made." Fast forward to about four months later in January 2020, and I’d moved to New York City for a full-time internship with MSNBC’s "Hardball with Chris Matthews" at the 30 Rockefeller Center office. [Editor’s note: Garnett worked her "Hardball" internship in person for the first three months before she returned to Kentucky in mid-March in the wake of the coronavirus outbreak.] Then one day, I was walking in the hallway of 30 Rock and passed by Jimmy Fallon. He waved to me and said, "Hey dude!"

Now I’ve interned for the "Today" show. It truly was a full-circle moment for me. I didn’t (and still don’t) give up by allowing any rejections to discourage me because if I did, I wouldn’t be where I am today; just a small-town Kentucky girl working for NBC.