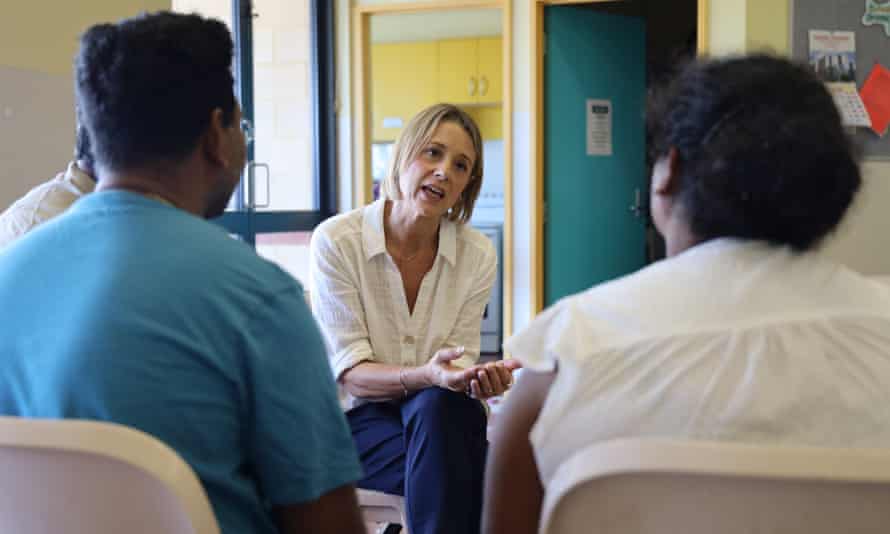 The two little girls in the Christmas Island Recreation Centre crèche are like many other children I have met in visits to childcare centres – keen to show me their drawings of rainbows, tell me they can spell their own names, and that their birthdays are coming up. Kopika, age 5, is serious and ponders my questions thoughtfully. Tharunicaa, age 3, twinkles with a cheeky smile. Like many little girls, they want to check out my rings, bracelet and necklace and show me their sparkly earrings. Then they want to run off and play with their friends.

Their parents Nades and Priya also look like most other parents I usually meet at childcare centres.

Priya hugs me immediately. She is both smiling and teary. Nades is keen to make sure I have a bottle of water and a comfortable chair.

Australians have seen so many pictures of this family, but we rarely ever hear directly from them. It feels unreal to be able to sit and talk with them.

Nades, Priya and their two little girls are the Biloela family. Nades and Priya are Tamil asylum seekers from Sri Lanka. They came separately to Australia and met and married here, settling in Biloela, Queensland. Both their daughters were born in Australia.

In 2018 the government forcibly removed the family from their Biloela home and attempted to deport them back to Sri Lanka. This, and further deportation attempts, have been blocked by court order.

Last year, the federal court ruled that the government denied Tharunicaa procedural fairness in having her claim for protection heard. The legal processes are ongoing.

Since August 2019 the government have held the family in immigration detention on Christmas Island. The family’s support in Australia is broad, led by the Biloela community and its #HomeToBilo campaign. The family’s support is also bipartisan with senior figures from both Labor and the Coalition backing calls to let them stay. The aim of these efforts is to urge the government to exercise ministerial discretion to allow the family to come home to Biloela.

Last week I travelled to Christmas Island. I applied and received approval from Australian Border Force to visit the family – Border Force even wished me a pleasant trip.

During my time on Christmas Island I also met the family at the Catholic Church for the Sunday service and in the visitors room at the immigration detention centre where they live.

The Biloela family has incredibly strong support from the 1,500 residents of Christmas Island. Posters with the family’s picture feature the main road. Wherever I went I found locals telling me that it is wrong to keep two little girls locked up in detention.

One of the family’s new island friends is Robyn, herself the mother of two young girls.

Robyn tells me that when the family first came to Christmas Island she called Border Force to request a play date with her children at the family’s detention centre accomodation. Robyn says the play date was permitted, but not at the detention centre, because Border Force told her “it is no place for children.” She said that statement was repeated twice in that phone call. She couldn’t believe it.

Robyn tells me that before Covid, community members could apply to come visit the family in the detention centre. During Covid that access was stopped. It has not been reinstated.

Robyn now takes her two girls to play dates with Kopika and Tharunicaa at the Christmas Island Rec Centre every Saturday for three hours. Another family, Arun and Joslin and their two children, come too. Arun is the child protection officer on the island and he and Joslin happen to speak Tamil. Every week the kids play in the crèche and the adults share a meal, talk, and play card games. Robyn invited me to come along to the play date and meet the family.

This time out of the detention centre is precious for the family. The girls go to school every day with a guard accompanying them. Priya and Nades can go to the recreation centre on Thursday mornings, and sometimes on Friday. All other outings have to be requested three days in advance. Recently the family got a rare approval to attend two community events – but only after the Christmas Island Shire president Gordon Thomson called up Border Force to make clear that the community very much wanted them to come.

The family lives in an empty detention centre. They have two rooms and two bathrooms, and that is essentially it. The whole family sleeps in one bedroom where there is a queen bed and a single bed. The beds take up all the space in that room. The other room has a single bed and they stack all their clothes and belongings on it.

In Melbourne immigration detention they were in a three bedroom house. Robyn says that Border Force have empty houses in the community on Christmas Island, but the family are not permitted to live in them.

As is the case in immigration detention, guards can come into their accommodation at any time, whether they are changing clothes or in the shower or the toilet.

Nades says Kopika loves school, but his eyes well with tears as he tells me that she asks him why the other kids get to go home after school and she has to go back to jail.

Nades and Priya say their girls are intelligent and friendly. The girls are happy when they are out in the community, but back in the detention centre they are, Priya says, “dead, no joy.”

These two parents both look at their most overwhelmed when talking about the effects of detention on their children: the girls are too young to understand and they ask their parents often why they can’t live in a house, go to the shops, or have friends over like all the other kids.

Priya tells me about how she and Nades feel stressed all the time. She says she feels little hope, except the hope and love she feels from her community in Biloela and friends on Christmas Island. The family knows about and is grateful for the wide support in Australia. They just don’t know how or when their situation will resolve, and they clearly fear deportation.

Nades tells me he fears if he goes back to Sri Lanka he will be arrested, prosecuted and killed.

Arun later tells me that he believes Nades fears are well-founded. It is clear that Arun worries that deportation will destroy the family.

They both talk about how much they loved the Biloela community, especially Priya. She lights up when she tells me about the friends and the support they had in Biloela.

Priya also tells me how she married late, at 36 years old, how she always wanted to be a mother, and that she just wants to raise her children to be safe and happy. Nades tells me that Tharunicaa was eight months old when they were seized by Border Force, and that all she has known in life is being surrounded by guards and living in detention.

When Nades speaks I sense a deep grief. He had a job in Biloela. He volunteered in the local community. He looked after his family. Now, he can’t work, he can’t resolve their current situation, he can’t give his family what they need, he fears deportation and death, and he can’t go home to Biloela.

After this visit, I can’t help think about a saying I once read: Happiness is having something to do, something to look forward to and someone to love.

Then I think about the fact that the Australian government has spent $50m detaining and trying to deport the family. This cost to taxpayers alone would be enough for new home affairs minister Karen Andrews to justify using her discretion to end this expensive exercise.

The government will say that Australia needs strong border control. I agree, absolutely. Offshore processing, boat turnbacks where it is safe to do so and regional resettlement are fundamental to border control and I support them. But we can be strong on borders without losing our collective national soul. That’s why the Migration Act gives the minister broad discretionary powers – and indeed, ministers exercise that discretion in thousands of migration cases every year.

Right now the international borders are closed due to Covid. Australia’s refugee intake is almost zero. After nearly four years and $50m, it is difficult to see how keeping this family in detention serves any purpose at all, except to take a terrible toll on this family of four who are wanted and loved by the Biloela community.

It is time to let these two lovely little Australian-born girls and their parents go home to Biloela.