I’m a biohacker who’s implanted a chip in my hand, microdosed on LSD, and stimulated my brain with electrical currents 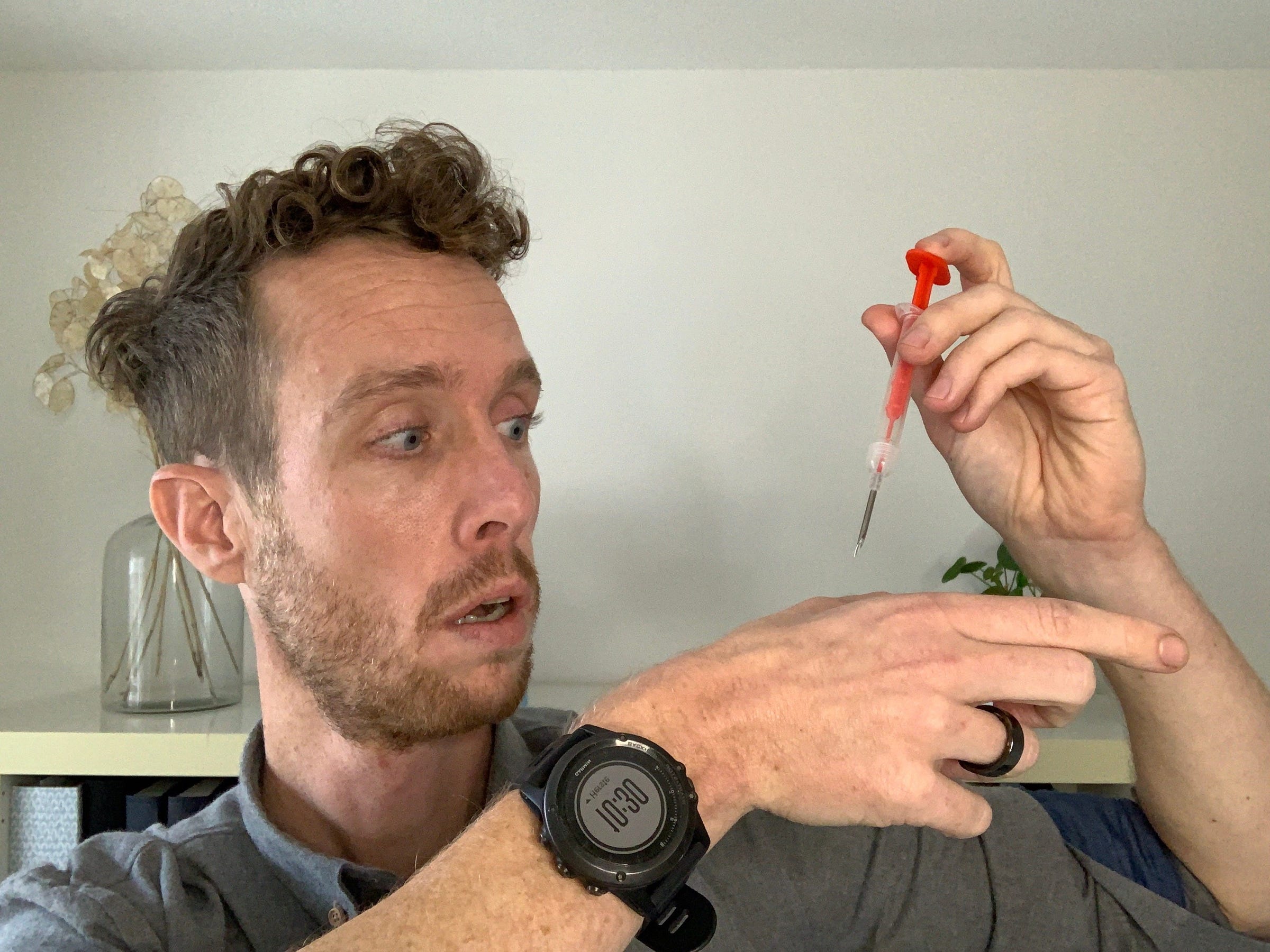 In 2012, I was working in consulting and wanted to start a sports blog. There were enough blogs about watching sports, so I became really interested in things like smart watches and how they can help athletes improve.

After about three years, my blog gained traction and I started getting questions from healthcare organizations about what patients can do with data and what wearables are useful in managing health.

In time, I was lucky enough to turn my hobby into my work. I give a lot of webinars and keynotes to businesses and governments on human augmentation — how we can use science and technology to not only measure but upgrade the human body.

People think of me as a weirdo or freak, but I say I’m a pioneer or experimenter. Like computer hackers in the past, we might seem on the fringes now, but we’ll come to have a large part in the future.

I hadn’t even heard the term ‘biohacking’ until I was well into it, but it’s what I do.

For example, I have a tiny chip under the skin between my thumb and pointer finger. It cost around $180 (about half for the chip and half for the cost to put it in), and right now it has my contact information. I’m currently working on getting another chip implanted in my hand (that costs around $300) that will enable me to pay for things by holding my hand to a scanner just like you do with Apple Pay.

The chip is about the size of a grain of rice. They just make a small incision and put the chip in, then stitch it up. Because of COVID-19, all of the piercing shops have been closed, so I haven’t been able to do it yet, but I hope to in the next few months.

Biohacking is much broader than technology, though.

I did some extreme fasting where I only drank water and tea for five days — it was quite challenging and I’m not sure I’d endorse it. My mom got quite mad at me for that!

The scariest experiment I’ve done sounds strange, but it came about because I’m quite an introvert. For a month, I challenged myself to talk to a stranger every day. It was quite difficult for me, even at day 25. It didn’t change me at all, though.

I really enjoy doing the Wim Hof method, which is a combination of cold immersion and breathing techniques. In the winter, I swim in a river near me to boost my immune system.

For brain enhancement, I’ve tried transcranial direct current stimulation (tDCS), which stimulates the brain with direct electrical currents to wake up or calm down.

I’ve also taken ayahuasca for a weekend. It’s a South American psychoactive plant that has long been used in spiritual medicine. It’s a fairly hardcore hallucinogen, but has credible evidence that the experience can change a person’s mood, thinking, and behavior.

The most interesting biohacking developments at the moment involve genetic modification.

Since CRISPR — a gene-modifying technology that allows scientists to find a specific piece of DNA inside a cell and modify it — came along in 2012, there’s been a huge amount of research going into changing what some call our "operating system."

CRISPR can help with existing diseases, but there are also people who want to use the technology to improve themselves in other ways.

There are two quite famous examples of this. In 2019, Chinese biophysicist He Jiankui is said to have "edited" twin baby girls to make them resistant to HIV.

Biohacker Josiah Zayner also tried to modify his muscles with CRISPR technology by blocking the gene which inhibits muscle growth, but that didn’t work out.

What interests me about these experiments is how we can use them to help people think about the future. Do we want the genes for stronger bones or increased memory? These will be the big questions.

At present, the only scenario where I could see myself using CRISPR is if I were to contract a deadly disease. In that case, I would be happy to volunteer my body to science as a guinea pig. But I can’t see myself trying CRISPR to improve my already able body just to get bigger biceps or something.

The next things I have planned are a week-long silence meditation retreat and trying out hyperbaric oxygen to see if it helps reduce aging in cells.

I’ve changed my mind on the issue of ethics.

When I started biohacking, I thought we should just completely set it free and allow everybody to experiment with themselves because that’s the way innovation and progress works.

There are two main camps: At the more extreme end, there are people who are into transhumanism, who think, "Why do we need these frail biological bodies when we can upload our minds to computers and be immortal in digital form?"

Uploading my mind to a computer is something I’m interested in, but only when the ethical and philosophical issues are sorted out. It would be fascinating for there to be two Peters, one biological and one living in the cloud.

I say that it’s our ability to use technology that makes us human, but we need to be careful with unregulated technologies because life-changing things can go wrong.

Another issue is because we already have social and economic divides, the wealthy will be who can afford these kinds of upgrades. If they’re the only ones who can afford to enhance their cognition and increase their lifespan and physical fitness, then we’ll also have a biological divide in society.

So far, I haven’t had anything go really wrong when experimenting on myself.

One time I was giving a talk to police and mentioned that I microdose on LSD, which has well-documented effects on mood and creative thinking without getting you high. I thought I might get in trouble, but they didn’t arrest me when I got off the stage or anything. I also tried the nootropic prescription drug Modafinil that keeps you awake, but it made me too agitated.

I think that sleep is often more important than nutrition, and I pay close attention to my sleep with an Oura wearable ring that measures my sleep quality.

I’ve definitely noticed that I sleep better when I stop drinking caffeine after 2 p.m., take magnesium, and meditate shortly before bed. No matter what, when there’s a full moon, my quality of sleep always decreases!

When it comes to the future of biohacking, I’m most interested in the brain.

I think that brain-machine interfaces will take off. Facebook and Google, as well as medical researchers, are all looking at methods to help us communicate with our brain alone.

Researchers are looking into whether patients can think about a certain movement and then control a machine or smartphone by lighting up that part of the brain. Facebook is also looking at a device you put on your hands that reads the nerve signals and communicates that way.

There’s also work being done in brain implants, like Neil Harbisson, a "cyborg artist" who has an implant to help him hear colors. Again, there are ethical questions here — meddling with the brain could mean affecting your soul or your identity.

Even as a biohacker, at the moment I wouldn’t volunteer to have a brain implant hook me up to the internet. But still, I follow this field with a lot of curiosity.

I’m really concerned about how some of these discoveries could be misused.

As with all tech like AI and blockchain, there are many issues in biohacking that need to be addressed, such as who has ownership of data and how we can safeguard privacy.

There are already concerns about our relationship as consumers with technology companies — think about how they will apply when we get the technology inside our bodies.

What worries me most is using biohacking discoveries for military purposes. A lot of countries are looking at not only cyberwarfare, drones, and artificial intelligence, but how they can use these methods on human soldiers.

The Defense Advanced Research Projects Agency (DARPA) already has a number of programs to find out what makes elite soldiers tick and see how they can be replicated in others. The Army is also reportedly exploring technologies such as nanotechnology, CRISPR gene editing, and pharmaceuticals to enhance the brains of its soldiers.

This is also why I think this topic of human enhancement is so important. We have to make wise choices about which technologies we want to use, for what purposes, and who decides these issues.