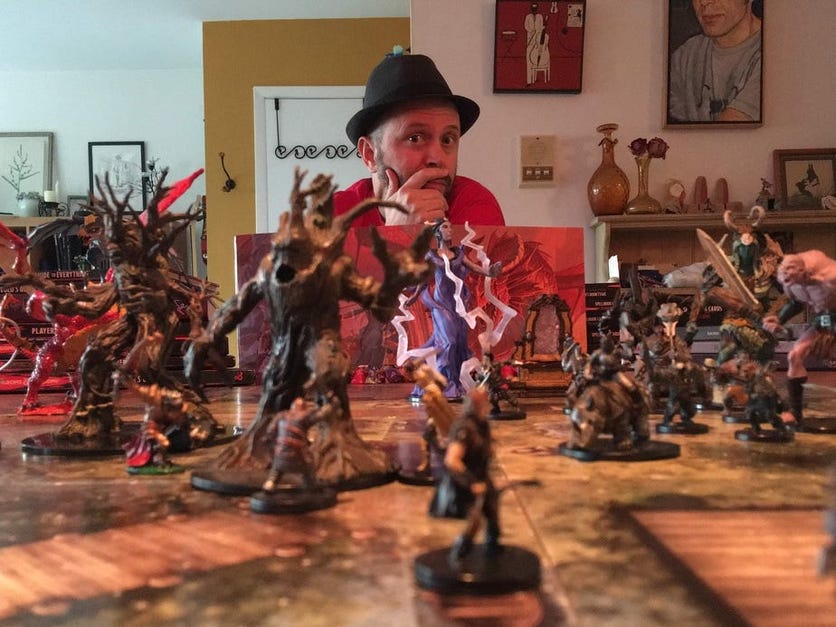 I’ve been obsessed with fantasy and have played Dungeons & Dragons since childhood. After college I moved to New York City in 1995 to pursue acting. Over the years, I worked in restaurants, played in a couple of bands, and started a few theater companies. Fast-forward many years, I got married and continued working in restaurants and taking whatever acting jobs I could.

One day in 2013, I was talking with a coworker about fantasy novels and mentioned Dungeons & Dragons.

My coworker said he’d always wanted to play, and within five minutes, I had my first adult D&D table — aka group of players — cobbled together. It was a wild success, and a version of that table still exists every Monday night.

Dungeons & Dragons is a game of shared, improvisational storytelling where major decisions can be made by dice. You start as a nobody and gain experience points by performing quests, like killing creatures, which earn you more powers. You don’t ever win the game. You just keep living in its world, and you need your friends along the journey to complement each other’s strengths.

Most importantly for me and my livelihood, all games have to be led by one player, called the dungeon master.

In 2016, I started working with a local teaching artist company for kids.

We’d go into NYC schools and do social and emotional training through theater exercises.

In 2018, at an after-school program in Brooklyn, I noticed that some of the kids were discussing D&D. One day, the other teacher I worked with didn’t show up, so I said, "OK guys, today we’re going to do D&D," and started a game right there.

The kids were so enthusiastic about the game that for the rest of the year, we just played D&D. In fall 2019, I decided to stop working with the teaching company and the school offered to let me run my own after-school D&D program instead. I’ve been there ever since.

Through word of mouth, I had enough interested students to begin 10 regular kids’ games online, with players from NYC as well as New Jersey, Florida, Pennsylvania, and California. These students’ parents pay me in advance either monthly or weekly.

I don’t take money for running that game I started with my restaurant coworkers; that’s my unpaid labor of love. But any other adult games I do are paid, as are one-off games and birthday parties. For a one-off game, I’ll charge more. For a campaign where we’re playing long-term (usually weekly), I charge less, because it guarantees a more regular income.

For a prepublished D&D adventure (aka "module") that  I’ve already read and know the material, I charge $75 an hour. If clients want to pay a little more, I’ll create a specific story based on where they want their characters to be — it’s almost like being a low-key novelist. If someone wants me to home-brew a whole new scenario for their game every week, that takes hours, so my rate would be about $125 an hour.

I work with some adults, but I find kids’ games to be much more hilarious. Kids are more murderous and much likelier to stab each other in the back. Kids also get more into acting like powerful and magical characters. They want to get the most treasure out of anybody in the group, whereas adults are more likely to problem-solve together. The other difference about adult games is that the comedy will be looser and, inevitably, raunchiness comes up.

My longest-running paid games are three years old at this point, and I’ve never had anybody leave a game, except one student who had to leave the game because he went to boarding school. I keep on top of what people want from the game so they don’t get bored, and regularly ask what I can improve or change. Overall, the feedback I get is overwhelmingly positive.

To be a D&D dungeon master, you need to have patience and flexibility.

I’ve never had to kick anybody from a table, but I’ve come close because people will try to push you. The No.1 rule of D&D is that ultimately, it’s the dungeon master who decides. So all rules fall below that in priority.