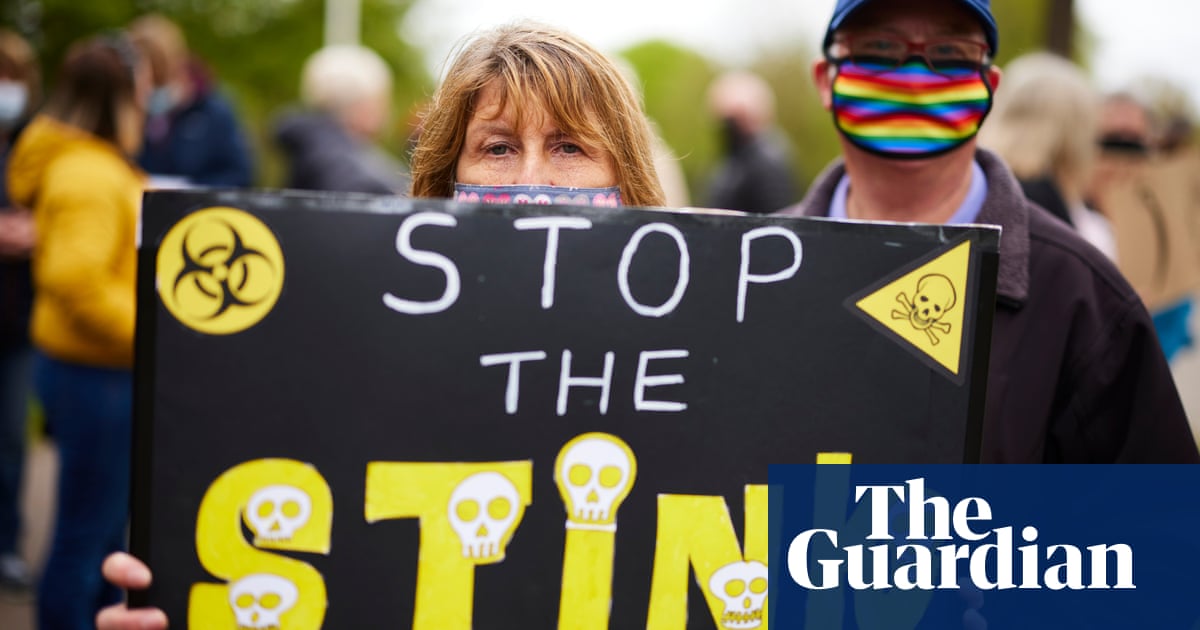 It may have been labelled the country’s smelliest village but it is much more than a bad stench making life miserable for the residents of Silverdale in Staffordshire.

For miles around Walleys Quarry landfill near Newcastle-under-Lyme, people have reported waking up in the middle of the night struggling to breathe, with itchy eyes and sore throats. Those with asthma have had their medication increased, and some have reported nosebleeds.

On the Facebook campaign group set up to “stop the stink” from the escaping hydrogen sulphide fumes, children pose for pictures next to air purifiers, many donated by local businesses to struggling families. On the worst days, teachers keep pupils indoors at lunchtime while parents are plagued with worry about the potential health effects.

“I just don’t think people can take it much longer,” said Gill Shears, a supply teacher living in nearby Westlands. “My daughter woke up at four o’clock in the morning with a nosebleed, and that’s scary. You worry what you’re putting your children through. Should I take her away? What’s going to happen to us in years to come, are we going to be ill?”

“It is a disgusting smell, but it’s far more than that. My asthma got a lot worse so I went on to regular inhalers and now I’m on an oral tablet as a direct result of the landfill fumes,” said Sian Rooney, who also lives in Westlands over a mile away. “I’m also extremely concerned about my three-year-old boy whose developed a nighttime cough. It’s terrifying.”

They joined hundreds of residents protesting outside the landfill on Monday, as operations resumed at the site after work to “cap off” areas as requested by the Environment Agency (EA) when emissions breached safe limits.

Residents say the capping has made no difference, with the smell last weekend worse than ever, and have started crowdfunding for potential legal action against the site.

“It’s an environmental catastrophe, and it’s becoming a public health disaster as well. I can’t understand why the EA hasn’t acted more quickly on it,” said local Conservative MP Aaron Bell. He welcomed a letter from Matt Hancock last week urging the regulator to use the full range of its powers to deal with the “woefully inadequate” site management.

“It’s grinding people down, I think we all feel like we’re under siege because it’s completely casting a cloud over the town. It’s been horrific,” Bell said.

Dr Paul Scott, a GP at Silverdale and Ryecroft practice, said hundreds of patients have come to them reporting issues, from physical symptoms to mental distress. “It’s the sheer numbers of people affected by it and we are probably only getting the tip of the iceberg coming to us,” said Scott, adding the surgery was tagging issues on their system as “environmental pollution” to track the scale of the problem.

“We’re connecting breathing trouble, particularly at night, with it. There’s also people getting bad hayfever type symptoms, eyes streaming, nose irritated. And then there’s the stress if you live nearby and you’re getting the smell on and off for seven days a week. It’s relentlessly lowering the quality of people’s lives.”

The landfill has been operating since 2005, despite objections to the original application in 1997 from the local councils that were overruled by the then secretary of state, John Prescott. The smell has always been a nuisance in such a heavily populated area, but since February the problem has escalated.

Some of the hardest hit are residents of a Traveller site situated just metres away from the quarry, where people feel they are being ignored by authorities.

“I think we’re the closest to it, it’s definitely affected our health since we’ve lived here. I’ve had to move on to inhalers, I could hardly breathe,” said Dorothy Price, 76, who has lived on Cemetery Road caravan park for close to a decade.

A spokesperson for the EA said it has installed monitoring equipment at four locations in the area to collect emissions data and had increased inspections in recent months. It has identified five incidents of non-compliance since January and has “required the operator to take immediate action”. The spokesperson said: “We will continue to hold the site operators to account to improve its management of landfill gas from the site and do everything within our power to bring the site back into compliance with its permits as quickly as possible.”

Red Industries, which bought the landfill in 2016, said it voluntarily curtailed operations at the quarry to speed up capping work, which is now complete. “We recognise that we are hosted by the local communities in which we operate and are acutely aware of their concerns regarding our landfill operations,” a spokesperson said. “Capping, gas management and other engineering works will continue throughout the operational life, as well as in the restoration phase of the landfill, at which point the area will be returned to greenfield.”