Matt Gaetz … who? The congressman’s former staffers are leaving him off their LinkedIn pages and professional biographies. 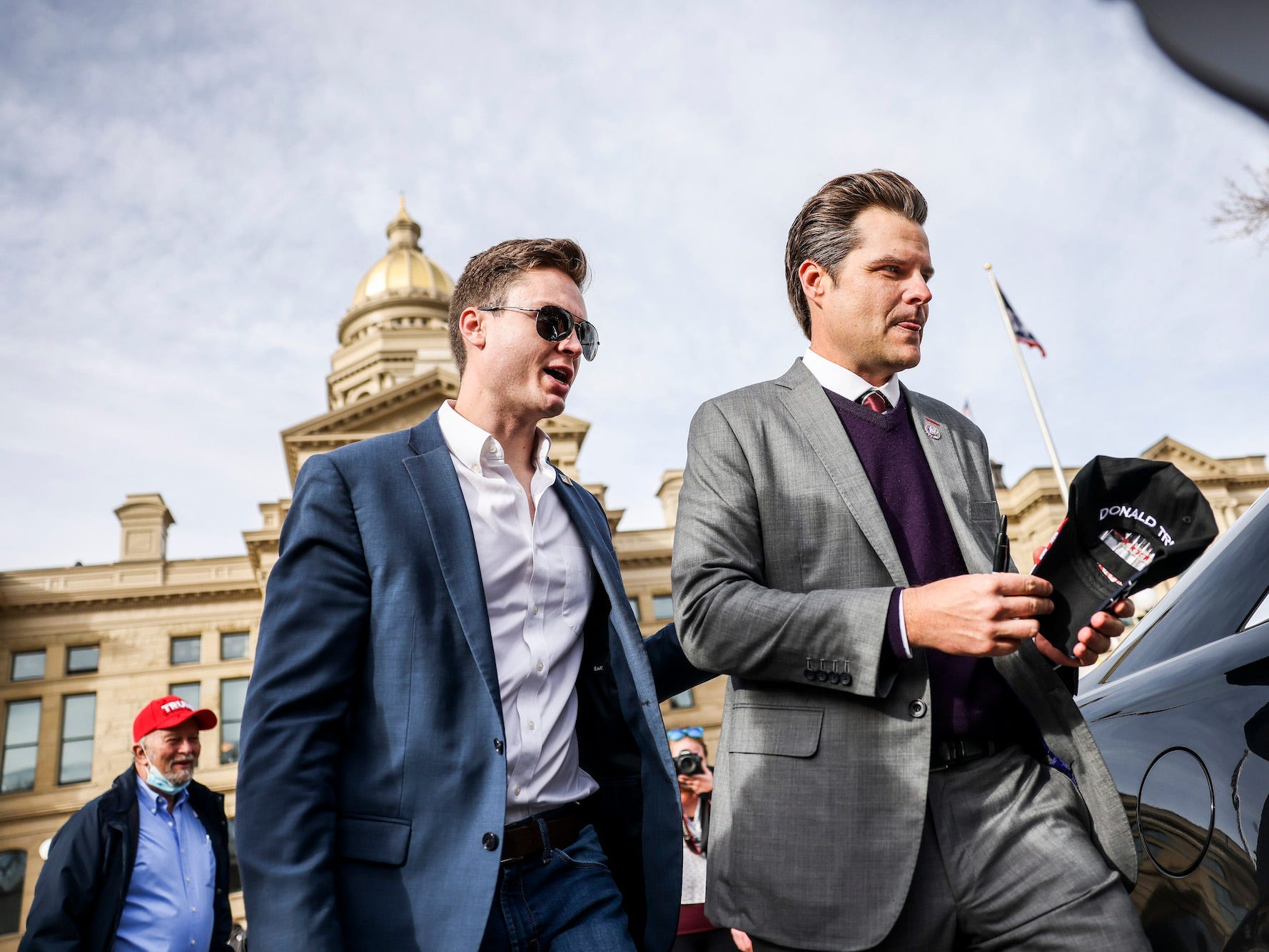 But you wouldn’t know it from looking at McFaul’s social-media accounts or his biography page for the law firm Ballard Partners. Gaetz’s name is absent from McFaul’s LinkedIn page, too, where he describes his duties during that time working as a chief of staff for an unnamed "congressman."

By contrast, McFaul’s LinkedIn account does name two of his other former bosses by name: President Donald Trump and former Rep. Jeff Miller of Florida, whose seat Gaetz won after Miller retired.

McFaul is one of many high-ranking Gaetz staffers who aren’t widely broadcasting their experience working for the embattled Florida congressman who’s at the center of a federal sex-trafficking investigation and a congressional ethics probe.

At least 25 of Gaetz’s former congressional staffers don’t mention the Republican congressman by name on their LinkedIn pages, according to an Insider analysis.

They include some high-ranking staffers: two former Gaetz chiefs of staff and two former legislative directors.

Gaetz’s former staffers, and even some of his current aides, are worried that having the congressman’s name on a résumé could hurt job prospects, a former Gaetz aide told Insider in a recent interview. This former aide acknowledged downplaying their own time working for Gaetz when interviewing for jobs.

"I knew how controversial he could be," the person said. "I never referred to him directly" in job interviews unless prospective employers asked specific questions, they added.

Read more: Republicans are unloading on Rep. Matt Gaetz in gossipy texts and snide asides amid reports of a DOJ sex investigation: ‘He’s the meanest person in politics’

It’s noteworthy when staffers — particularly high-ranking congressional employees — keep their bosses’ names off their professional biographies, political operatives on both sides of the aisle told Insider, since staffers often like to make known their connections to powerful lawmakers.

"In a town where people spend all day and all night long bragging about the fact that they work on Capitol Hill, this is really weird," said Jim Manley, a longtime Senate Democratic aide who worked for Democratic Sens. Harry Reid and Ted Kennedy.

When asked for comment about the 25 former staffers who don’t mention Gaetz on their professional profiles, Gaetz’s congressional office directed the inquiry to Harlan Hill, the president of the Logan Circle Group public-relations firm who works as Gaetz’s spokesman.

"The only way the media would know this is if they are trawling through former Capitol staffers’ social media pages," Hill told Insider in an email.

"The only reason those staffers want to keep certain information away from their social media pages is because the stalkers in the corporate media keep harassing them in a continued, partisan effort to undermine Rep. Gaetz," Hill added. "This creepy media behavior will be made very public soon. Stay tuned."

‘Savvy to leave that name off’

Former Gaetz staffers have reason to worry about their careers, a former congressional aide who worked for GOP leadership in the House and Senate said.

"There is literally no upside to putting Gaetz on your résumé," the former Republican staffer, who spoke on condition of anonymity to protect professional relationships, said.

"You wouldn’t want to say, ‘Hey future employer, I worked for a guy who was a potential sex trafficker,’" the former GOP aide said. "It’s very savvy to leave that name off."

Gaetz has denied that he broke any laws, and he hasn’t been charged by prosecutors. The congressional ethics investigation into Gaetz’s conduct is ongoing.

McFaul declined to comment about why Gaetz’s name wasn’t on his LinkedIn page or his Ballard bio page. McFaul had intended to work in Gaetz’s office for a few months training Gaetz’s then-deputy chief of staff Amanda Cogan to replace him, the congressional database LegiStorm reported at the time. But "Cogan’s promotion came sooner than expected" when McFaul moved to Ballard only a few weeks after Gaetz started, according to LegiStorm.

McFaul’s lobbying clients include some big-name corporations: Amazon, US Sugar Corp., Boeing Co., and the medical-cannabis company Trulieve, according to federal lobbying records.

Another former Gaetz chief of staff, Kip Talley, says on LinkedIn that he worked for a "freshman Member of Congress from Florida" for a year and seven months but omits Gaetz’s name. But Talley specifies on LinkedIn that he served as an intern in Sen. Arlen Specter’s office for three months in 2004.

Talley does say on his Twitter biography that he’s Gaetz’s former chief of staff. He did not respond to a request for comment for this story.

Heather Ham-Warren, who’s now the director of federal government relations at the tobacco giant Reynolds American Inc., was Gaetz’s legislative director for the first year he was in Congress, but she doesn’t mention him by name on her LinkedIn biography.

Gaetz isn’t the only name she left off. She also worked for Miller, Gaetz’s congressional predecessor, but doesn’t name him on her LinkedIn page, either. Ham-Warren does specify that she interned for Florida Republican Reps. Trey Radel and Cliff Stearns in 2013 and 2010, respectively.

Pamela Watt was a caseworker for Gaetz’s congressional office for three years, from July 2017 to July 2020. Before that, she served as a district secretary for Florida state Rep. Halsey Beshears, who was later appointed secretary of the Florida Department of Business and Professional Regulation by Florida Gov. Ron DeSantis. Beshears traveled on the flight to the Bahamas with Gaetz that’s at the center of the sex-trafficking probe, The New York Times reported.

Watt doesn’t name Gaetz or Beshears on her LinkedIn page. The page says only that she worked as a district aide for the Florida House and as a caseworker in the US House. She did not respond to requests for comment.

Laura Rakas spent more than two years working for Gaetz as a district aide and an events coordinator. But Gaetz’s name isn’t on her LinkedIn profile or her biography page at the Doolittle Institute, an organization that supports the Air Force Research Laboratory. Rakas’ bio page says she worked for a "U.S. Congressman" but doesn’t specify whom. She did not respond to requests for comment.

Devin Murphy, who left his job as Gaetz’s legislative director in April after news of the sex-trafficking investigation broke, doesn’t mention Gaetz by name on his LinkedIn profile. But he does refer to a news story about his departure from Gaetz’s office. Murphy declined to comment for this story. Some current and former Gaetz staffers continue to publicize their work for the congressman.

The longtime Gaetz aide Luke Ball left the Florida congressman’s office in April, soon after the allegations of sexual misconduct surfaced against Gaetz. Ball still identifies Gaetz by name and features photos of the congressman on his LinkedIn profile. Ball has since landed a job as the communications director for Rep. Pat Fallon, a Texas Republican.

When the news of the investigation into Gaetz was breaking in March and early April, some of the congressman’s staffers were getting ready to send out their résumés and pursue opportunities elsewhere, the former Gaetz staffer said.

They’re "preparing to jump ship if it gets to that," the former staffer said, but others are "riding the wave" for now.

"We were doing a lot of group chatting through texts back in March when things were really heating up," that person said. "It’s calmed down a lot."