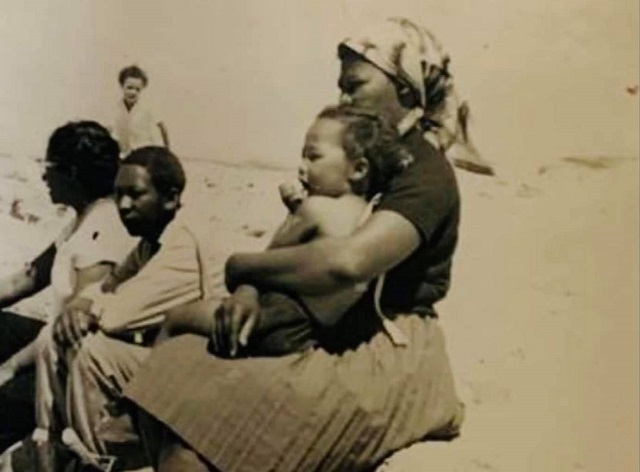 As for my mother? Her life wasn’t easy, and in a country where the color of your skin shaped your life, she believed herself to be ugly because she was black in a white South Africa.

On my most recent trip to Cape Town, some old family friends handed me a few black and white photo’s of me with my mother, and other children who used to be playmates. I was a scrawny little thing with long legs and the only one in the various group pics with bare feet. There’s a lively energy about me, and I seem impatient with posing. There’s one pic in particular that wrenches at my gut-I’m sitting on my mother’s lap, she’s holding me firmly while staring out to sea. I look as if I’m squirming to get out of her lap. The pic was taken at a time of her life when she was working as a sleep-in domestic worker for a white Jewish woman in Sea Point. Next to her is the only pic of her younger brother called Boetie, who became one of those many young black men in apartheid South Africa in the 60’s and beyond who drifted through a series of menial jobs in Cape Town, and he suffered occasional spells in prison for vagrancy or petty theft. I remember that he visited us once to ask my mother to take him in. She was forced to say no, because at the time she could barely fend for us. I still have a memory of him walking away after that conversation with such a defeated look about him. We learned much later that, like many others, his life ended on the side of the road. My mother struggled for a long time with her own sense of guilt that she couldn’t take him in.

As for my mother? Her life wasn’t easy, and in a country where the color of your skin shaped your life, she believed herself to be ugly because she was black in a white South Africa. She resembled her father, a Xhosa man, and she always recounted her amazement that she was classified as ‘colored’ because there was no way that she could’ve passed the pencil test! But there she was, in the Cape province that she moved to from the South Cape, and that enforced, upon prison sentence, a strict colored job preferential policy. But even with that classification, the job pickings remained poor and menial. She took to wearing a short black wig with stiff plastic fibre hair, that over time turned into dry bristles at its ends. It was always pinned down firmly with a doek, and it eerily retained its shape like a faceless women on the side table next to the single bed we shared. We never had a conversation about my lighter skin color that was in some contrast to her own. It never mattered to her, even within an apartheid context where lightness was privileged, either as a badge of honor or as something that confered an advantage. I wonder if it reminded her of the pain of being forced to trade in her own Xhosa identity in order to make a living? I’m sad that she is no longer with me, and did not live to see and enjoy the fullness of her dreams for me. Still, I wonder as I look at this picture, with her holding me while she stares out over that cold sea in Sea Point on one of her off-days as a servant there….was she seeing the poverty and despair of her own life, and starting to knit together in her mind what my life could be if she gave me what she never had?

I remain my mother’s dream.

( The writer is a diplomat, served as South African High Commissioner to Sri Lanka)