Real-estate firm CBRE put together a 15-page report to prove how remote work won’t actually kill the office. Here are the 3 slides you need to see. 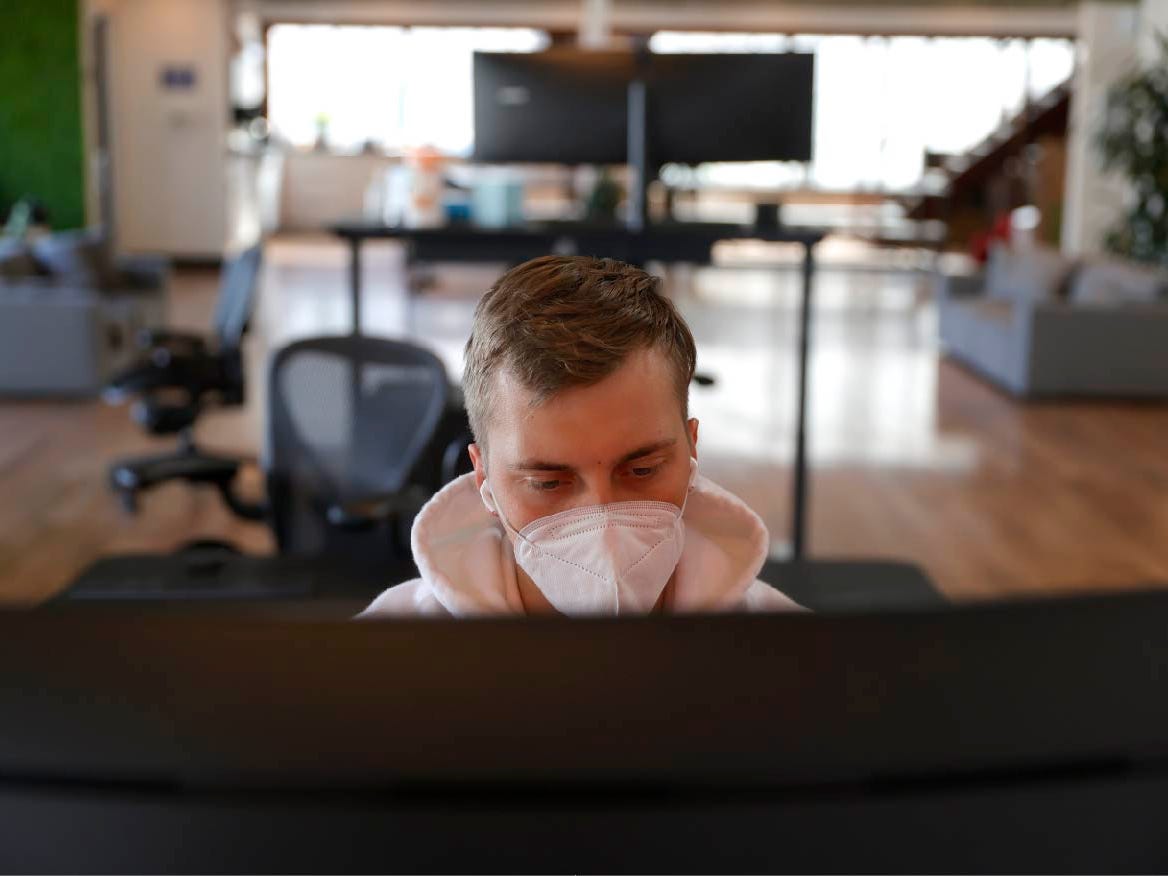 Now that corporate giants like Apple, Goldman Sachs, and Google are calling most employees back to the office, America stands on the precipice of a mass return to in-person work.

For the last 15 months, design experts and business leaders have speculated on what the office of the future will look like, scrutinized how other countries are handling their post-pandemic returns, and agonized over remote-work burnout and the need for in-person interaction.

The latest prediction: Companies will only need 9% less office space per employee, while the pandemic-fueled downturn in office rents and the uptick in vacancies will end by 2025, according to a new study by CBRE, the world’s largest commercial real estate services and brokerage firm. It’s impossible to know exactly how’ new hybrid work models will actually affect companies’ need for physical workspaces — and the US office real-estate market more broadly — but CBRE’s forecast is both the most recent and most specific analysis so far.

The data comes from CBRE’s latest econometrics report, a 15-page document sent to clients that draws its conclusions from a survey of 185 companies of all sizes that the firm conducted among its office-space occupiers this spring.

CBRE found that most companies are expecting employees, on average, to spend 24% less time in the office. Most also said they are planning to return to the office in the third and fourth quarters of 2021.

This lower — but not substantially lower — demand per employee and return timeline has led CBRE to project that the office market’s recovery from the pandemic won’t look too different from what happened after both the 2008 global financial crisis and the 2001 dot-com crisis.

"The office market is going to continue to be challenged because we’re emerging from a recession, and as normally happens, the office market altered in the recession," Julie Whelan, CBRE’s head of occupier research, told Insider. "But we do believe that we are going to recover from an office standpoint in line with past real-estate cycles."

Whelan, along with CBRE’s research director and senior economist Matt Vance, walked Insider through a deck with the findings and conclusions of the occupier survey and econometrics report.

Making the impact of the pandemic on in-person work seem minimal does, to be sure, align with the business interests of CBRE, which both leases and manages office space. But taken together, these studies offer ample evidence for the argument that the most recent crisis won’t spell the death of the office despite the rise of remote and hybrid work.

We’ve selected three slides from the deck that best illustrate the firm’s reasoning.

1. This slide explains how CBRE was able to turn the expectation that more employees will work remotely from now on into a concrete estimate of how that will affect demand for office space. CBRE’s survey of office occupiers showed that even though many companies are adopting hybrid models, workers will still be tethered to a physical office. Only 4% of companies surveyed said that they would try a full-flexibility model, allowing employees to make their own rules about their office usage, while only 6% surveyed said that they would either be fully remote or "virtual first."

The vast majority, 60%, of those surveyed said they would allow hybrid schedules — a mix of remote and in-person work — but also implement guidelines about employee office use. The survey also found that 85% of companies expect their employees to spend at least half of their time in the office.

Overall, 72% of respondents said they expect to moderately shrink their office footprints, but only 9% expect to shrink it significantly, or by more than 30%. A version of the survey conducted in September 2020 found that 39% of respondents expected their office footprints to shrink significantly, a sign that expectations of radical office-use change are fading.

CBRE’s data shows that workers will spend an average of 3.2 days in the office per week, down from 4.2 days before the pandemic, in 2019. Even though that amounts to 24% less time in the office, there are other factors that keep firms from shrinking their footprints by a corresponding 24%.

For one, hybrid work means that there are times when more workers are in the office at the same time. Firms need enough space to accommodate employees for the busiest days — which are expected to fall in the middle to the week — not their average. There are also the spatial implication of new collaboration-centric office designs that trade rows of desks for informal meeting rooms and amenity space. CBRE projects that shift will require 15% more space per employee than older layouts with traditional private office space.

Timing also plays a part, as changes to office footprints usually happen when leases (which are typically long, about 10 years) expire. It costs companies money to get out of leases early or to shrink them before their end date. The boosting effects of job and GDP growth means that many companies will be hiring and expanding in the next several years, making up for what might have otherwise been a reduced amount of space needed per worker.

2. This slide shows how a single firm would calculate how much less space it might need if it currently holds a 10,000-square-foot office lease. "A company that has just reduced their time spent in the office by 24% might believe that they can reduce their footprint by 24% as well," Vance told Insider.

Some firms may do that, but they could end up getting crowded fast. If a firm were to just base it off of average days in the office, they’d shrink in size to 7,600 square feet from 10,000 square feet.

But doesn’t factor in the uneven nature of office usage across the week. People are more likely to come in mid-week than on Mondays or Fridays, meaning that many workers will be in the office at the same time. This is exacerbated by more collaborative office plans that rely on people coming into the office at the same time for meetings and events.

This efficiency factor — which is what CBRE defines as the ability of companies to convert reduced time in the office to reduced desk space — raises space requirements up to 8,000 square feet. Now take into account the collaborative office plans, which raise the total square footage needed to 9,100.

These calculations explains how even, though employees are expected to be in the office for 24% less time per week, CBRE is projecting companies will need only 9% less space.

3. This slide compares the COVID-19 office market to past economic downturns. Cumulative rent decline, peak vacancy, total change in vacancy, and number of years to recovery are shown for the COVID-19 pandemic, the 2008 world financial crisis, and the 2001 dot-com bust. This slide brings together all of the previous calculations about office space and extrapolates it to the office market as a whole.

The forecast sees vacancies peaking at 18.5% in the second quarter of 2022, more than the two past downturns cited.

But because so many companies plan to return in the second half of 2021, a full recovery will happen sooner than after the 2008 and 2001 challenges. And after a few months of observing office use and operations, CBRE expects firms to begin expanding or upgrading and leasing new spaces in earnest.

Rents haven’t dropped as much, either. CBRE projects rents to jump back their pre-pandemic levels in 2025, as economic growth — and the additional employees that get hired as a result — make up for any decrease in space needs due to the mix of remote and hybrid work.