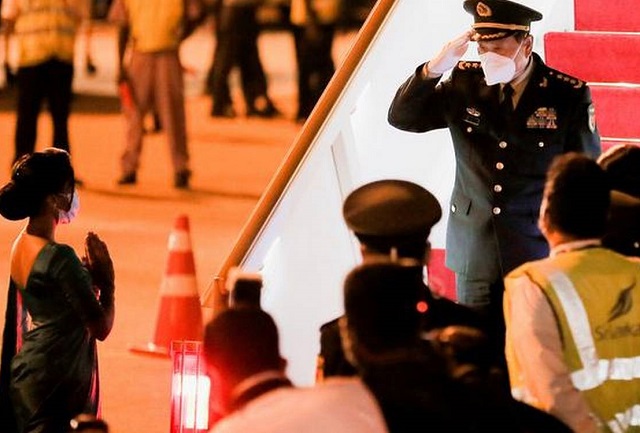 The recently held Quad summit, which transformed an informal frame work of the US, India, Japan and Australia, into a formal grouping with a broad range of objectives in the Indo-Pacific seems to have triggered China into action in South Asia.

China’s State Councillor and defence minister Gen Wei Fenghe made a two-day visit to Colombo after making a fleeting visit to Dhaka on May 27.

However, the President tweeted “Had a fruitful discussion with #china defense minister General Wei Fenghe this morning. This visit will further strengthen the ties between the two countries.”

After he met with Prime Minister Mahinda Rajapaksa, the PM tweeted, “I conveyed my gratitude to the govt of China for the generation donation of Sinopharm vaccines & PPE kits since the outbreak of the Covid 19 pandemic.” Of course, 600,000 doses of Sinopharm vaccine has not yet been cleared for use by Sri Lankan health authorities so far, for want of trial documentation, is a matter of detail.

After meeting with President Gotabaya Rajapaksa and Prime Minister Mahinda Rajapaksa, Gen Wei remarked peaceful development and win-win cooperation is the global trend and ‘right way’ forward. He added, in a not-so-subtle reference to the Quad, that certain major countries were keen to form cliques and factions and seek regional hegemony, which goes against peoples shared aspiration and severely harms the interests of regional countries.

The Chinese minister had made similar reference during his Dhaka visit, when he met President Abdul Hamid and discussed furthering military cooperation between the two countries. He added to jointly maintain regional peace and stability, the two sides should make joint efforts against powers outside the region setting up military alliance in South Asia and practising hegemonism.

Gen Wei is the second highest ranking visitor to Sri Lanka from China after the onset of Covid 19 pandemic. In October 2020, Director of the Office of the Central Commission for foreign affairs of the CCP Yeng Jiechi  visited Colombo. His visit came in the wake of the four Quad members meeting in Tokyo pledging to increase their participation in a regional initiative – “Free and Open Indo-Pacific” – aimed at countering China’s growing assertiveness in the region.

Even as General Wei was waxing eloquent about China’s relations with Sri Lanka, a political controversy was raging over the control mechanism for  the prestigious Chinese-aided Colom Port City project, which is getting ready to go on stream. The infrastructure is now being developed for building a modern city. The project is a part of China’s Belt and Road Initiative (BRI) in Sri Lanka executed by the China Harbour Engineering Company (CHEC), by investing $1.4 billion in reclaiming land. It is now preparing to market and build support facilities.

The Colombo Port City Economic Commission Bill (CPECE) to regulate the special economic zone to be created there, was presented in parliament during the month. The bill is now before the Supreme Country for clearance as required by Sri Lankan law, before it is voted in parliament. Though the project to create Colombo Port Special Economic Zone (SEZ) on reclaimed land with Chinese assistance had the blessings of previous governments, it has triggered a huge controversy. Many fear it would further plunge the country in China’s debt trap diplomacy, like the Hambantota port project did.

The Bill provides for setting up of a Colombo Port City Commission consisting of five or seven members. The Commission would be the decision maker on all matters of the SEZ, to include clearing of applications to do business, giving tax breaks and concessions on customs, VAT, import and export provisions and gaming laws, not available at present to investors elsewhere.

According to the Bill, the President shall nominate the members of the Commission, with power to  unilaterally and replace them. The process totally excludes the collective responsibility of the Cabinet and parliament. This has reinforced the existing fears of the people that the Executive President was concentrating too much power in his hands, after the 20th amendment to the constitution.

Not unexpectedly, though the opposition parties the United National Party (UNP) and its clone the Samagi Jana Balawegaya (SJB) welcomed the project, they are opposed to the bill. Leader of the opposition Sajith Premadasa of the SJB has said if the Bill was enacted, “the country will become servile to foreigners.” He called it an insidious tactic “violating the Constitution in a blatant attempt to betray the sovereignty of the country.” SJB leader Lakshman Kiriella pointed out that 25 laws of parliament would not apply to the SEZ. He wanted the government to ensure the SEZ is overseen by parliamentary panels. The Jantha Vimukthi Peramuna (JVP) leader said the Bill was tantamount to creating a “Chinese province” in Sri Lanka.

As many as 12 petitions including those of the opposition parties are before the Supreme Court challenging the Bill. Sri Lanka government can present an amended Bill based on Supreme Court’s recommendations and pass it in parliament.

There are indications that Sri Lanka is also facing a new wave of Covid-19 pandemic which has hit many countries, particularly India. From a low figure of 220 new cases on April 7, during the last three weeks of the month, daily figure touched an all- time high of 1466 new cases on May 28.  With Covid pandemic count recording over 1000 fresh cases on two successive days towards the end of the month, public health inspectors have urged the government to implement a complete lockdown for a period of two weeks to prevent a complete breakdown of health services in the country.

According to Sri Lanka government’s published data, the country has recorded 106, 484 confirmed Covid cases up to April 30. Out of this 95445 people have recovered, while 667 people have died.

Sri Lanka had been following the isolating of Covid clusters as a strategy though there is evidence of community transmission. Former speaker Karu Jayasuriya and leader of the National Justice Movement has cautioned the government not to underestimate the looming pandemic threat. He said the country had only 300, 000 doses of vaccine and nearly 900,000 people need to be given second dose. He appealed to the government for urgent action on this. He also urged the government to take all measures to provide adequate hospital facilities to cope with any situation. He appealed to all parties to come together on this issue.

However, in spite the mounting Covid numbers, Sri Lanka has not yet decided to close the airport or restrict tourist arrivals. Tourism Minister Prasanna Ranatunga said a decision on this would be taken after considering all parties concerned and in accordance with health authority recommendations. Sri Lanka had been keen to encourage tourists from India, one of the biggest markets for Sri Lanka tourism and creating a travel bubble with India was aggressively pursued so far. However, the huge spike of pandemic cases in India has dampened the move, at least for the time being.

It is significant that China had pledged to set up a reserve of “emergency supplies’ with South Asian nations, during talks with five countries in the region on combating Covid-19. In an online conference held on May 27, China’s foreign minister Wang Yi and his counterparts from Sri Lanka, Nepal, Bangladesh, Nepal, Pakistan and Afghanistan discussed ways to against Covid-19” according to the Chinese ministry statement. India, Bhutan and Maldives did not attend the conference.

[Col R Hariharan, a retire MI specialist on South Asia and terrorism, served as the head of intelligence of the Indian Peace Keeping Force in Sri Lanka 1987-90. He is associated with the Chennai Centre for China Studies. E-mail: colhari@gmail.com ]