Sustainability starts from the get-go, it’s not a switch you turn on: Dixon 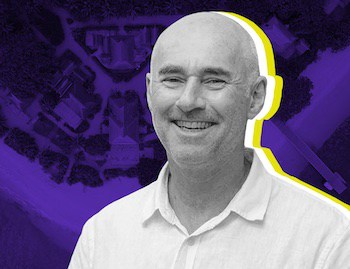 “NET Zero” may be all the rage right now in discussions around sustainability but for Andrew Dixon, founder and director of Nikoi and Cempedak islands, its journey started in 2004 because, if you’re running a private island resort, “you’d be a bit of an idiot if you’re not trying to be sustainable” from the get-go.

Said the former banker-turned-hotelier, “One of the big things, is when you’re on an island, you have to deal with your water, waste, electricity, so by default, you’re a bit of an idiot if you’re not trying to be sustainable, because you’re starting to look at your own costs, and you want to be reducing them.”

“… when you’re on an island, you have to deal with your water, waste, electricity …”: Andrew Dixon

So from the start of opening Nikoi (18
beach-houses) in 2007 and later Cempedak (20 villas) in 2017, Dixon had his
sights focused on cutting waste and costs out of the equation and this focus
has resulted in impressive successes in water, power, and waste management
through the years.

For small tourism businesses on the
ground, Dixon says practising sustainability starts with measuring and
monitoring usage, creating a microcosm of applied big-data, centred on the
islands. This needs both a technology and people approach – one cannot do
without the other.

For example, an extensive network of
water meters measures usage at numerous points on the islands. In the early
days, meters were read, and their readings entered manually into a spreadsheet.
These days, more of the data can be uploaded directly and, as the cost of the
technology comes down, even more granular data will become available.

Dixon talks about seeing spikes in water
readings and being able to identify a leak from a particular villa (which is
significant when a leak can waste more than 30,000 litres of water a year). It
would also be an impossible task without the network of water meters he
deploys, not just because of the challenge of finding the leak, but because a
leak from a single villa would not register as a large spike in water use
across the entire resort.

A third of the resort’s power is used to
pump water, so there are knock-on savings in power consumption too, but the
power management on the islands is more sophisticated than that.

The resort recently upgraded the Photovoltaic System on Nikoi making them 90% solar powered, and though they still run generators, the batteries from the PV system store power when any excess is generated, and the system can draw on that when there is a spike in power usage rather than having the generator work to meet the spike in demand.

This stabilises the entire system
allowing it to run at an optimal capacity that is 20% more efficient than
previously.

Even though the technology underpinning
the PV system has incredible potential, as Dixon puts it “really the best solar
PV system is the one you don’t have to put in because you’ve reduced your
electricity demands”, and huge effort is invested into adjusting loads on the
island.

Smart sensors and monitoring devices such as the Smappee Infinity system can monitor power draws from individual appliances, providing crucial data for making decisions about energy reduction and more.

Dixon gives the example of briefly
turning off power-hungry appliances like the air conditioner in a restaurant
for 10-15 minutes – “[the guest] wouldn’t mind, they might not even notice, but
it would save you burning out your generator because you’ve spiked your load or
the whole lot going off because you’ve gone through your threshold.”

Beyond technology, Dixon knows that
getting buy-in is an important part of the process and he believes that the
biggest impact is when the staff bring sustainable ideas with them and
replicate them in their own homes, as has happened with initiatives in waste
management and mosquito control among others, which he hopes also positively
impact the communities around them.

Staff also voluntarily participate in a Green Leaders programme, which exposes them to the 4C framework of Conservation, Community, Culture, and Commerce espoused by The Long Run of which it is a member, and gets them thinking about the role they play in sustainable initiatives.

Many of the Green Leader initiatives were
not even guest-related but small operational changes that improved staff living
spaces and quality.

Just as he balances technology-driven and
people-driven solutions, Dixon balances a commitment to sustainable initiatives
with a clear-eyed pragmatism about what can be achieved. He encourages his
Green Leaders to go for low-hanging fruit and small changes that add up, for
the same reason that the island resorts will likely never be 100% solar-powered
– because sustainability needs to be, well, sustainable.

For the islands to become completely
solar powered, they would have to provision enough batteries to store power for
the rare two-to-three-day periods of incessant rain that occur just once or
twice a year; that spare capacity is wasted for the rest of the year.

In a similar vein, the resort recently made a sizeable purchase of Haiku fans, which are sensor activated and use 20% of the usual power, but the motion sensors on these gorgeous fans are switched off in guests’ rooms, because if the fans stopped while guests were asleep, it would detract from their comfort.

For sustainability to be practical and
actionable, there is little room for zealotry, no matter how laudable the
cause. This also explains why Dixon believes that checklists and prescriptions
will not cut it moving forward.

“It’s often a journey, (sustainability), and you realise on some properties, some things are easier, or harder to do,” instead, Dixon says, he relies on the framework and guidance of The Long Run, drawing inspiration from what other members are doing on their weekly or fortnightly calls, gathering feedback, and sharing solutions.

As a journey, sustainability’s terminus
is ill defined – what does it mean to be 100% sustainable, and can that even be
achieved? The islands are now collecting more waste out of the environment than
they are putting into it, so technically, their waste impact on the environment
is positive.

But Dixon is not sitting on his laurels,
especially at this current time with the Covid pandemic having brought his
business to a standstill for the last 14 months. Though the islands are closed
to guests, there are still around 200 staff on payroll, and as Dixon puts it “there
is still quite a lot to do just to keep things ticking along”.

A lot of effort is going into planning for a reopening and while there are no guests around, they have taken the opportunity to bring forward planned maintenance work.

The other big project that Dixon and team have been working on is the coastal clean-up that was started in collaboration with Seven Clean Seas.

Under the programme, Seven Clean Seas sells
plastic credits (similar to carbon credits) to corporates to offset their
plastic consumption. It then uses that money to pay furloughed staff to do
beach clean ups.

So far, Dixon reports, they have
collected 60 tonnes of plastic (the equivalent of 3,000,000 plastic bottles).
The initiative has gone so well that Seven Clean Seas has tripled the size of
the programme and is setting up a permanent programme with a significant grant
from Microsoft.

“It’s a never-ending journey” Dixon says,
“you’re always going to find ways to improve it, through technology, research,
but [it is also about] recognising that not everyone’s going to get there at
the same time, and not in the same way.”

But as he’s demonstrated with Nikoi and Cempedak, it matters how you start – that sustainability should be embedded within the business from the get-go – and it’s about the small and little steps you take along the way, which add up to a lot over time.

• All images credit (featured image is the farm that supplies much of the food for Nikoi & Cempedak islands): Andrew Dixon/Nikoi Island