The dream of the techno-utopian workplace is dead. Remote work proved that digitizing the workplace isn’t liberating, it’s a company-controlled nightmare. 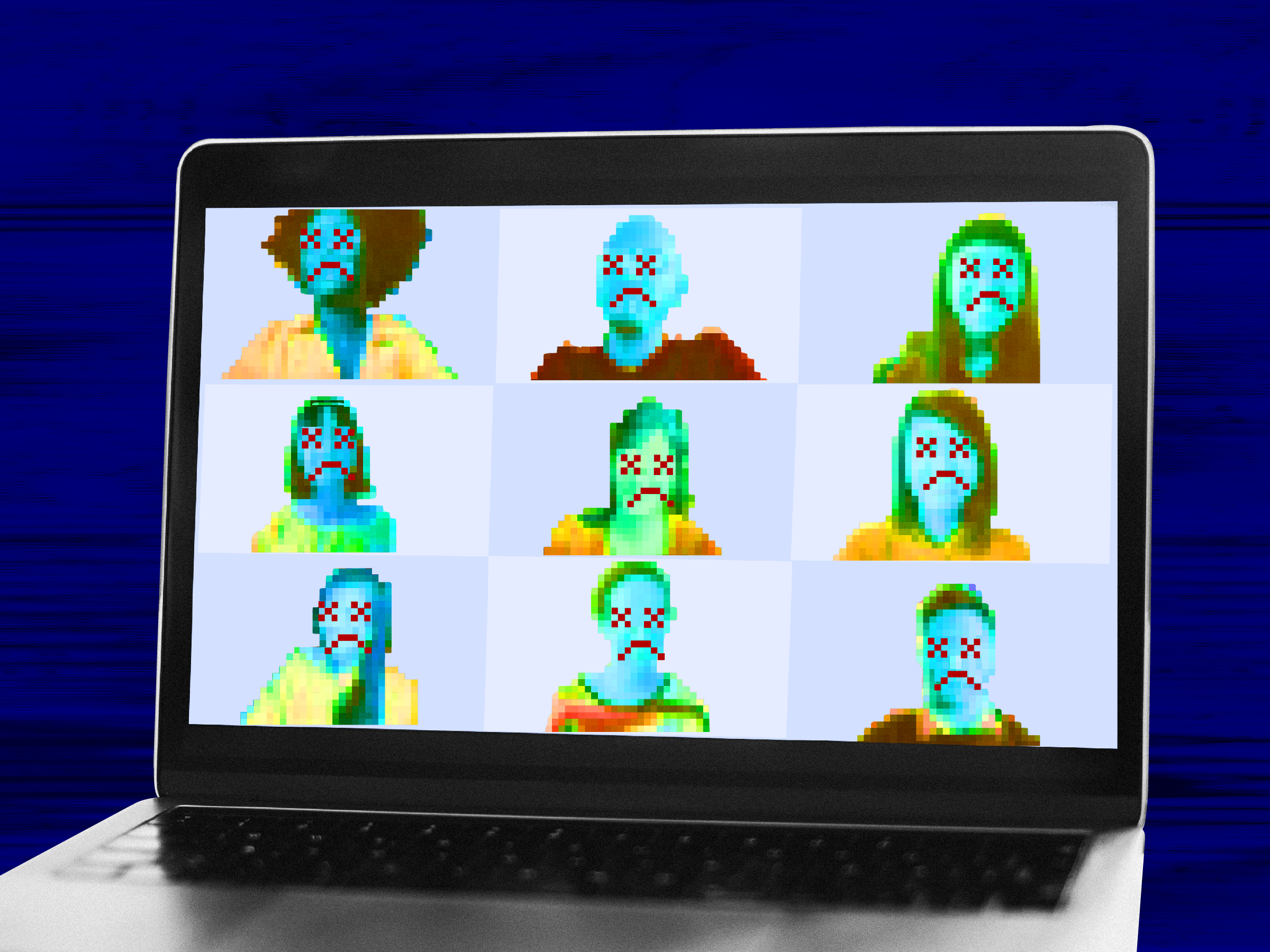 When Twitter CEO Jack Dorsey abruptly announced last year that his employees could work remotely "forever," the move was hailed as no less than "the end of the office as we know it."

A year later, the mythos of the digital workplace persists. Companies now insist that the pandemic has heralded in a new, if inevitable, age of work — one in which technology is enabling "workforce liberation," as one CEO wrote in March. "Once a futuristic vision," Boston Consulting Group has pronounced, "the bionic company is here."

The new cyborg workplace promised by corporate America is placeless; perfectly digitized and perfectly efficient. Its workers have been freed from the old shackles of the office. For years, business executives have pushed to better integrate technologies like artificial intelligence in the workplace, arguing that greater employee autonomy will follow. The pandemic, they claim, has proved this to be true. "We are seeing a human transformation right before our eyes," Dell’s Chief Operating Officer Jeff Clarke told investors last year. Under this model, worker productivity has reached "an all-time high," he said.

Don’t fall for this charade. A year into the pandemic, it is more clear than ever that Zoom calls and "people analytics" are no antidote to the woes of the office. Automation and new technologies have never liberated the workplace; they aren’t doing so now, either.

Instead, companies are deploying tech to cement their control over employees. This sort of control is certainly not new. In the early 20th century, Frederick Taylor pioneered a strategy of "scientific management," which placed workers under close surveillance in a ruthless pursuit of efficiency. But the age-old trend accelerated rapidly when the pandemic forced more than a third of the US labor force to work virtually.

The ideal of a digitized, "flexible" workplace is a familiar one. It draws from techno-utopian thought birthed in Silicon Valley, which in the early days of the internet imagined technology as a democratizing force, a means to secure personal freedom.

"There was a strong sense back then … that wiring the world was good in and of itself," Chris Hughes, a now-defected Facebook co-founder, told The New Yorker in 2019. It did not take long for this ethos to reach the workplace.

For years, gig platforms like Uber and Instacart have touted their "new model" for work — using the language of liberation to describe a labor model that, in reality, quite closely resembles exploitative practices of prior decades. Uber’s tech might be innovative, but its vision for labor is not. Uber’s lobbying campaign for Proposition 22 in California, which exempted app-based drivers from being classified as employees, deployed this same techno-utopian language. "We believe a better way to work is possible," the company wrote to its employees, urging them to vote for the legislation. Ultimately, the ballot item passed, greenlighting an independent contractor system that takes advantage of drivers and is likely to be replicated across the country. The erosion of employee benefits is being dressed up in the language of innovation.

But the behemoth companies that have recently joined in to claim a liberated, office-free workforce were — just a year or so ago — fixated on the physical office.

From luxury offices to digital offices

In 2018, cloud-computing behemoth Salesforce unveiled its new corporate headquarters in downtown San Francisco: a 1,070-foot skyscraper that, to date, stands as the tallest building west of the Mississippi River. The building is decked out with the usual luxuries of tech campuses: lounges, meditation rooms, and a "media center."

Then, in February, the company bluntly announced that its 9-5 workday was "dead." Salesforce did not plan to wholly abandon its offices, president Brent Hyder assured employees, but instead hoped to "create the office of the future" — one that hinged on remote work, significantly reducing office use. Its skyscraper, which has indelibly changed the San Francisco skyline, quickly went from crown jewel to disposable commodity. This about-face is less confounding if workplace technologies are understood to function in much the same way as meticulous office design. As Benjamin Naddaff-Hafrey writes, the utopian office — whether Salesforce’s skyscraper or Epic Systems’ bizarre, fairy-tale headquarters — entices workers to extend their hours, blurring the lines between work and leisure.

A virtual workplace, it turns out, does this better — or, at least, companies like Salesforce are banking on it. Studies have indeed demonstrated that "productivity" increases when employees work remotely, but attribute this effect, in large part, to longer working hours. Perhaps as a result, some studies have found that remote workers report burnout at higher rates than their in-person colleagues.

Companies, of course, could take measures to improve remote conditions by better regulating workers’ hours or easing expectations around productivity. But this is unlikely. For the most part, companies that have decided to adopt a remote or hybrid model have cited increased efficiency as a key reason for doing so.

A new form of employee surveillance

As companies invest in their virtual workplaces, they are at the same time investing in new technologies for worker surveillance. Employee monitoring has a storied history, particularly in the US, but its newfound popularity casts doubt on the "liberation" of employees in the virtual workplace.

One recent survey of 2,000 companies using remote work found a "rapid" uptick in use of such tools. More than three-quarters reported that they conducted employee surveillance. A stunning 57% of those companies said that they had implemented the tools within the last six months.

Driving the trend, the survey found, was fear held by company executives that they had "a lack of control" over their remote business. A majority reported that they "don’t trust" their employees to work without such digital supervision — an anxiety that will likely drive autocratic management practices in the virtual office.

Companies that peddle employee monitoring tools have happily capitalized on that fear, branding themselves as a cornerstone of the future of work. "With more and more employees working outside the office," writes monitoring company InterGuard, "digital employee monitoring is more important than ever."

Their tools are far-reaching. Teramind’s live demo of its monitoring platform demonstrates a sophisticated system, one that records keystrokes, sends live "alerts" when employees spend above-average time on social media sites, and ranks workers by their calculated "productivity." This is our supposedly emancipated workplace.

Yet, remote work — despite all of this — remains popular among workers. And for good reason: The fight for greater flexibility in the workplace, led by people with disabilities and working parents, dates back decades. If there is a grain of truth to companies’ claims of a liberated workforce, it is here. For many, remote work is an important accommodation. It is, maybe, a liberating one.

The issue is that the pivot to the virtual office was not intended as such. The change was forced by the pandemic and, subsequently, driven by the interests of employers — after years of companies refusing to make such changes. As StaffCop Enterprise, another employee monitoring vendor, explains it: "Gone are the days when remote work was only appealing to employees."

As Marianne Eloise writes, disabled people still need accommodations, within a remote workplace or not. Unsurprisingly, there has been no new rush to provide greater accessibility. And many jobs, while increasingly digitized, cannot be done remotely — a reminder that the companies that claim to provide ubiquitous flexibility are generally doing so only for highly-paid, white-collar employees, widening the cracks of the fissured workplace.

A year of heightened virtual surveillance, amid false claims of freedom, has shattered the ideal of the techno-utopian office. Still, the status quo of the workplace is always under threat. Sometimes, this disruption does come in the form of technology: A ride-hailing app co-op that hopes to topple Uber and Lyft’s empire in New York City, for instance, or a company developing technologies that would aid worker unionization. But this is not innovation on its natural course; it is something we must fight for.