What it’s like to be a personal assistant to an influencer, according to 5 people who’ve done it 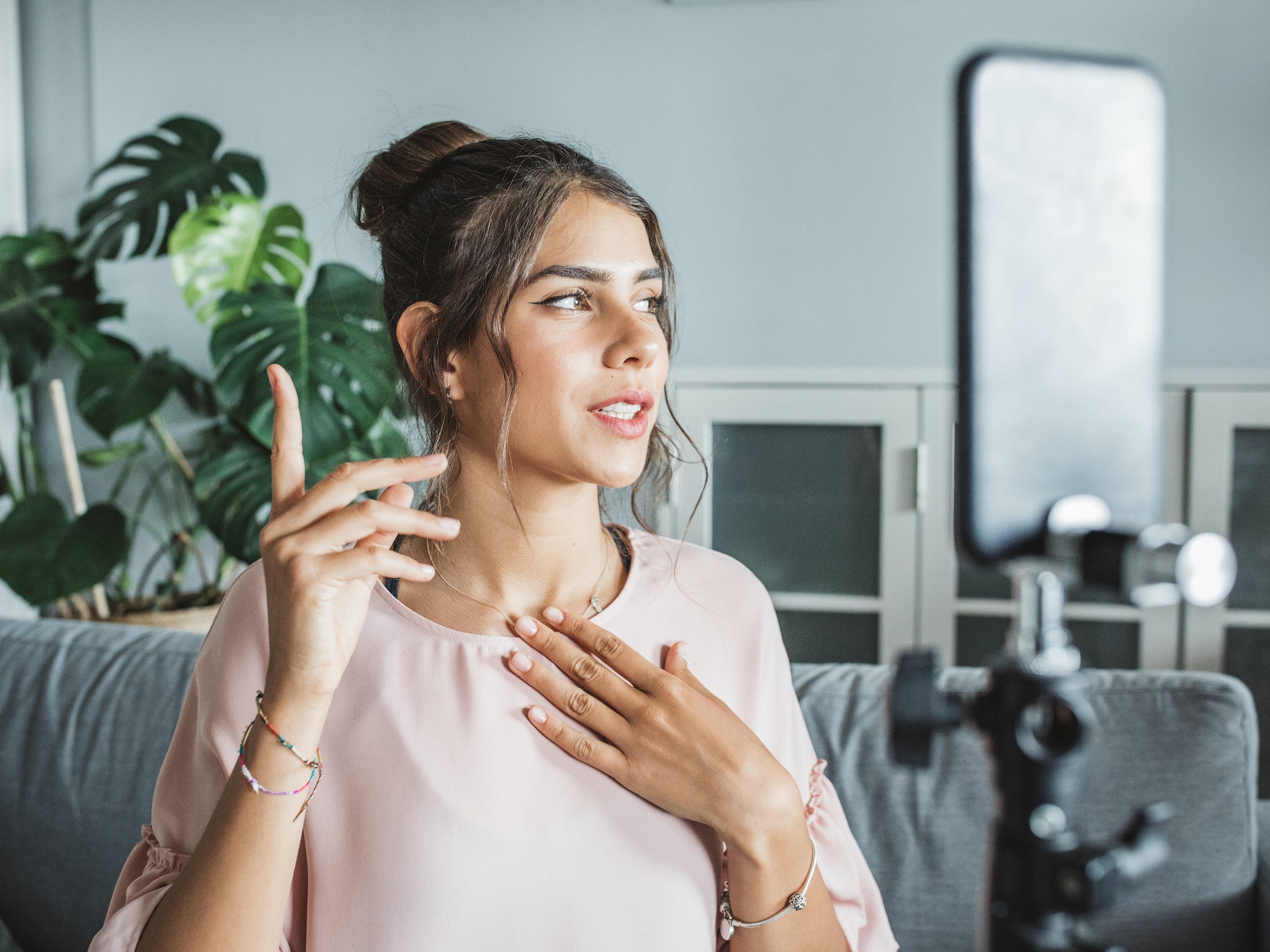 Last August, an anonymous "well-known celebrity/influencer with 10+ million followers” posted a listing on Entertainment Careers for a personal assistant.

The advertisement went viral for the job’s demands, which included being "on call almost 24/7," keeping "all emotional/private matters away from this world," remaining "sober yet social," being "on property around eight hours a day," and being able to handle "hundreds of small tasks at once."

While the listing has since been deleted, influencer assistant jobs may only continue to populate job boards more and more as the industry grows.

Insider spoke to five people who have worked as assistants for TikTokers, YouTubers, and Instagram influencers to learn what the job entails, how to get one, and what types of opportunities they can lead to. While most have had positive experiences, many of their responsibilities don’t sound all that different from those listed in the ridiculed Entertainment Careers ad.

Assistants detailed a job that entails wearing multiple hats, changing day-to-day schedules, and developing close relationships with clients. They emphasized the importance of liking the influencer you work for, as well as being prepared to do almost everything and anything.

Most assistants get the job via word of mouth

Influencer assistants have access to their client’s daily schedules, phone contacts, daily routines, and personal documents — making the job one that requires a trusting relationship. Thus, many influencer assistant roles are advertised through mutual friends and family as opposed to official job listings.

Brittany Hendrix worked as an assistant for YouTube star and sister-in-law Sazan Hendrix, who has 521,000 subscribers on the video platform, between 2015 and 2021. When Hendrix originally heard about the gig, she told Insider she didn’t know much about the job — just that her brother Stevie and his wife Sazan, who had around 350,000 followers on Instagram at the time, were looking to build a business in the influencer industry and needed an extra hand.

"I thought, sure, I’ll move to Los Angeles for a year," Hendrix said. "But then, one year turned into five. It’s such a personal business, and I think you’ll find that a lot of influencers work with their family in some capacity or another." At the time, the 27-year-old was working in social media and radio promotions for companies such as Playlist Live and CBS Radio. Since the beginning of Russell’s career, she said she’s been in circles that encompass or run adjacent to influencers — from working as a temporary executive assistant to Atlantic Records to being the VIP Coordinator for the 2017 Boys of Summer tour, where social-media influencers hosted meet-and-greets for their fans across the country.

"When my friend reached out in October, I was working in Boston," Russell said. "He asked me to come out to LA to help out with the house and see if I liked it. For a few months, I’d be traveling between LA and Boston, and in February my friend left the Compound. Then, I kind of took over the role of being a full-time assistant for Taylor, Nat, and the twins."

Russell’s biggest piece of advice? Be nice to everybody. "You never know who’s going to be in the room you want to be in or be in a position down the line where someone in the industry can help you out," she said.

When Kamaryn Truong accepted the job of assistant to a YouTube and Instagram star with more than 166,000 followers, whose name she declined to offer for privacy reasons, she said she was promised her role would entail producing video and photo content and coordinating and sourcing partnerships with brands. As a multimedia producer, Truong hoped the gig, which paid $20 an hour, would help her build her professional portfolio, as well as provide valuable networking opportunities. However, Truong said she ended up not doing any visual projects — and most of her responsibilities included doing strictly personal tasks, from setting up dentist appointments to sourcing landscapers.

"Often I would get Slacks at midnight or 11 p.m., way outside of corporate working hours, where I would be asked to do very specific things," Truong said. "I remember once I had to figure out how to install a charger for his sauna, which was really tricky because I had to make decisions with the electrician while he was on a business trip. I would also have to drive his Tesla to pick him up from the airport and help organize his clothes."

Similarly for Russell, every day at the Triller Compound is different — and most recently involved preparing Holder for the viral "Social Gloves: Battle of the Platforms" boxing match between TikTok and YouTube stars.

"There’s not really a job description for being an influencer’s assistant," Russell said. "Some days I don’t have to be at the house until 10 a.m., while on others, I have to be there at 5 a.m. I do everything from throwing parties, setting up brand deals, making sure we have food in the fridge, and picking up packages."

But for Russell, unpredictability is the appeal of the role. "I’m constantly learning new things and facing different challenges. There’s not much more in a job that I can ask for," she said.

Actually believe in and like who you work for

Truong quit working as an assistant after three months due to issues ranging from poor communication to little mobility in her role. And although Truong described her experience as largely negative, she doesn’t think it has to be for everyone.

"Being an assistant is a service, and you have to choose your clients carefully," Truong said. "It’s a fun job if you’re helping someone you enjoy being around. But if you’re around someone who’s not pleasant, it won’t work out." Kate Giffin, who worked as an assistant to YouTube star Brianna Renee, who has 1.28 million subscribers, from October 2018 to February 2020, ended up forming a close relationship with the Canadian influencer over the years.

Most of Giffin’s job entailed working on the creative side of production — from filming videos to editing to finding bitmojis for Renee’s "Draw My Life" series. And even when Giffin had to run errands, she said it didn’t feel like a chore, but rather hanging out with a friend.

"We would often take breaks in between tasks just to hang out and talk," Giffin said. "Brianna would also help me with my own YouTube channel and just give me advice on creating videos and promoting my content."

Influencer assistant roles can be avenues to other creative jobs

In 2019, Ariana Newton began working as an assistant to cofounder of TheWeedTube and former YouTube star Arend Richard making $15 an hour. Richard launched The WeedTube in 2018 as a site for curated cannabis content after YouTube deleted the accounts of creators who made cannabis-related videos. While Newton’s initial responsibilities as an assistant included taking notes at meetings, researching what type of cannabis content was being flagged online, and traveling with Richard to cannabis conferences, she was promoted into a community manager role for TheWeedTube at the beginning of 2020.

"When we went into the pandemic, it didn’t really make sense for me to be a personal assistant, because Arend and I were both quarantined separately," Newton said. "Once we went into remote work, I was doing a lot more of organizing livestreams, delegating tasks for the book he was writing, and shifting into the business side of advertising for TheWeedTube."

A few years after working as her sister-in-law’s assistant, Hendrix started managing her brother Stevie, who has 130,000 followers on Instagram, and his brand campaigns as well. By 2019, Brittany gained enough experience to found Bien the Agency, her own digital-media agency for influencers.

"Working as an influencer assistant doesn’t have to end there," Hendrix said. "You could end up doing influencer marketing, operating an influencer’s skincare or clothing line, or even starting your own agency."