When I first became a millionaire I bought fancy cars and watches. Now I’m much more thoughtful in my purchases — here’s how I spend my money. 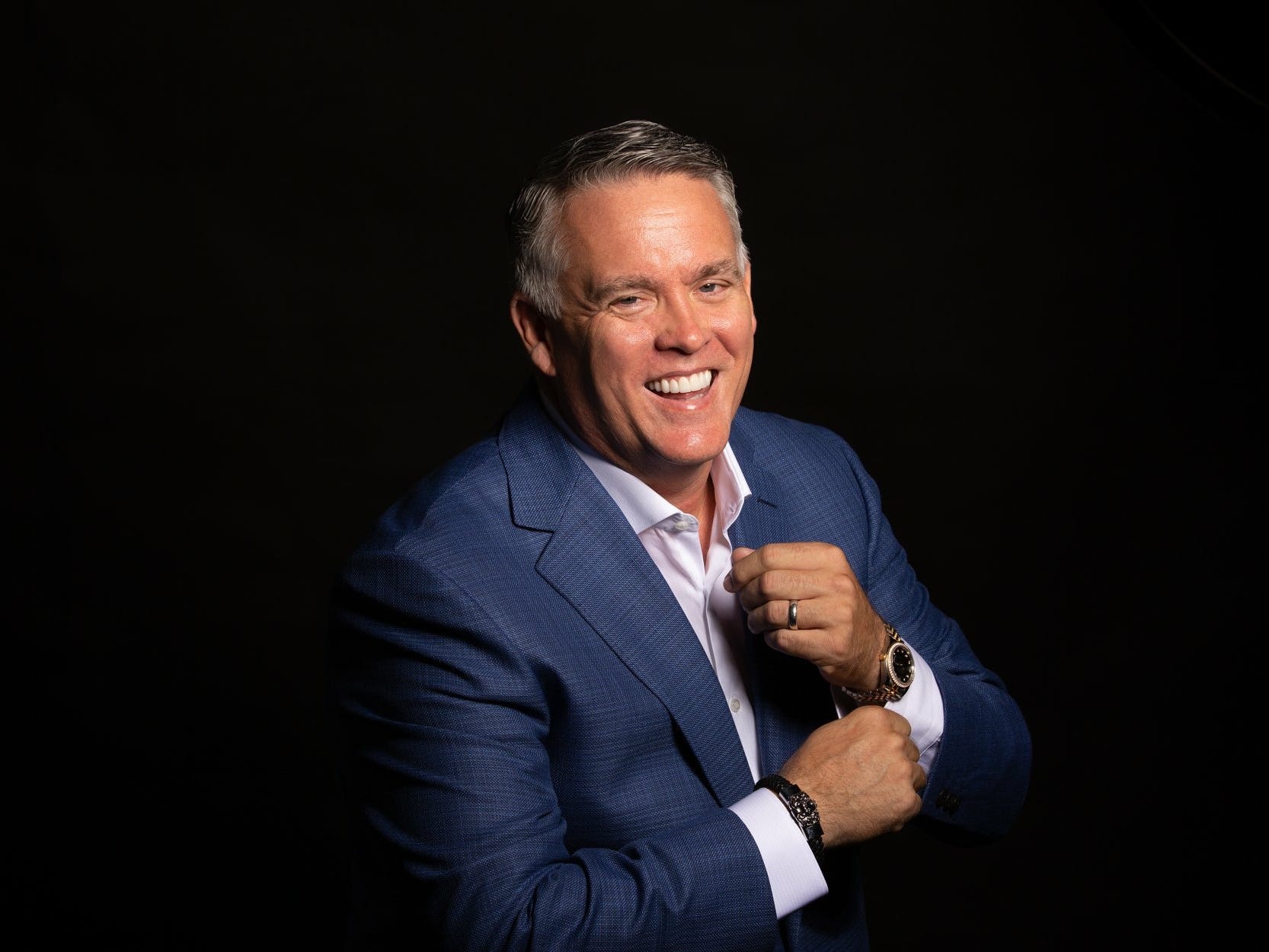 I’ve been an entrepreneur and investor for 25 years. I’ve exited seven companies and made millions in these exits.

Some entrepreneurs build businesses with quick exits and giant payouts in mind. That’s not me. I truly enjoy launching, nurturing, and growing businesses that bring people both joy and prosperity.

After graduating from college, I worked as an employee for 1 1/2 years before starting my first company, Grassroots Event Marketing Inc., in 1995.

Now 50 years old, I look back on starting my first company at age 25 and realize it was the best decision of my career.

In my 20s, it was all about the concert industry.

I started out in event production, having played a significant role in the beginnings of the Vans Warped Tour.

Then I moved on to work with the founders of Lollapalooza, and together we created the SnoCore Tour. We would go to snowboarding resorts during the day and play concerts at night.

We had a lot of famous bands on that tour — Blink-182, Black Eyed Peas. I was the guy who would go out and get corporate sponsors to write checks.

At 28, I rented out Keystone Resort in Colorado and got an amazing list of speakers for my first personal-development retreat.

I didn’t sell many tickets and took one hell of a beating financially, but helping college students felt good in my heart — and here I am 25 years later still leading retreats.

That led to my establishing University of Dreams (now Dream Careers Inc.) to help college students pause and think about what they’re going to do with their lives. I exited for $2.5 million. I’m also the codeveloper of a five-story, mixed-use commercial office building in Silicon Valley. My partner and I personally invested and raised $64 million to build the property. It took two years to build, and in year three we received an offer to sell the building, doubling our investment.

In all, I’ve founded or cofounded more than 20 businesses over the course of my career. I’ve been able to create my own investment fund as a result of these successes, which I leverage to support passion-driven founders with huge, world-changing visions.

I’ve also found other ways to spend my earnings — some purchases better than others.

Early in my career, I purchased the Fox Theatre in Redwood City, California, for $6 million.

Eighty-year-old, decaying live-performance theaters don’t have the best track record for quick exits and giant payouts. Purchasing one in a city nicknamed "Deadwood City," even less so.

Nobody wanted it! I took out a loan and purchased the city block for $6 million. I was up for the challenge, as I had ideas on how to best monetize it.

After seven incredible, joy-filled years operating the theatre and leading a renaissance in downtown Redwood City (they don’t call it Deadwood City anymore!), I was able to sell the property for $19 million. My personal gain was a little over $10 million — more money than I ever expected to have in my lifetime.

I’d just turned 45, and though I promised myself I’d put away those earnings and live off interest, I surprised myself by doing some hilariously irresponsible spending first.

My wife and I bought a Ferrari F430 Spider, a custom Porsche Cayenne Turbo, a Tesla X, a BMW X5, and a couple of very expensive Rolexes — and snapped up a mansion or two.

One was a 12,500-square-foot home on a 4-acre estate in Silicon Valley that came with a sprawling vineyard overlooking the mountains. I lived there for four years with my wife and established the Boa Vida winery, selling the wine at our various concert venues (I sold it last year).

At the time, I wasn’t even really that interested in winemaking, but I heard another big player in the Silicon Valley area owned a vineyard and decided I had to have one. I won’t lie: It was fun. At least for a while.

Cliche as it might sound, I woke up one day and thought, "Well, none of this is actually bringing me joy. So what’s next?"

After consulting the Bad Idea List for Newly Rich Dudes, I started throwing fistfuls of cash at semirandom startups.

I was relatively new to both entrepreneurship and investing back then and easily drawn in by the passion of founders who approached me with their pitches. Dozens of them asked me to support their ideas, many of which seemed innovative and viable, and it felt good to support them.

They found me in myriad ways. I’m a member of the Entrepreneurs’ Organization, and as the founder of Bliss Champions, I’ve coached more than 150 entrepreneurs in the past three years.

Additionally, I ran a large internship program for more than a decade. Those former customers are now all in their 30s, and many have become entrepreneurs.

But I quickly learned that nearly 90% of startups really do fail, so I was basically setting my money on fire.

One former customer persuaded me to invest a significant sum of money so he could become a backup speaker to a well-known business author. Looking back, I should have recognized that if the author really wanted this to happen, he would have simply hired this person. I also invested more than $100,000 in an invention that went nowhere, teaching me that inventions are actually quite expensive.

Dumping cash into startups as a novice investor is almost worse than buying sports cars. At least you can resell a Ferrari.

As I made financial gains, I learned that I was becoming financially unrelatable to almost everyone I knew and cared about.

People start seeing you as a paycheck or a checkbook — that’s all.

Now I’m much more thoughtful in my purchases.

I’m proud to support Chavez for Charity, a line of colorful bracelets that donates profits to critical humanitarian causes, and Justin Jean PJ’s, a quality sleepwear product designed by an inspiring woman, among others.

On the investment side, I purchased Bliss Island Resort for $2.9 million in August. It’s an incredible 10,000-square-foot, eight-bedroom Victorian estate and 3.5-acre oceanfront property located on the Big Island of Hawaii. I’ve turned the property into a full-service retreat destination for entrepreneurs and aspiring business owners. I rent the space out to coaches for personal-development retreats and also host transformative incubators myself, where I mentor individuals to take action on their ambitions.

I’ve also recently commissioned the building of the Bliss Yacht in Lake Travis in Austin, Texas, for $1.5 million. I plan to use it as an additional private luxury space that can be rented out for retreats.

My other recent real-estate investments include three new houses: one in Austin, another on the Gulf coast of Alabama, and the last a beachfront property in Destin, Florida. They’ve diversified our portfolio and will be used as vacation rentals, in addition to housing me and my family. I’m the youngest of five and so is my wife. My side has 17 family members, and her side has seven.

But I’m most excited about my latest venture, which has me traveling around the world to teach asset-wealth management.

This is where I step into my zone of genius: monetizing assets that others have dismissed, overlooked, or abandoned.

In private consultations, I meet with potential investors to identify a class of asset they’d like to pursue for acquisition and create a playbook that’s tailored to their business. Then I guide them on the asset hunt and advise them through the offer and acquisition processes.

I definitely plan to keep launching businesses. My entrepreneurial spirit never seems to die down.

But my days of splashing out on fast cars and bling are well behind me. Moving forward, I’m more excited to use my creativity to generate value and help other visionary entrepreneurs do the same.